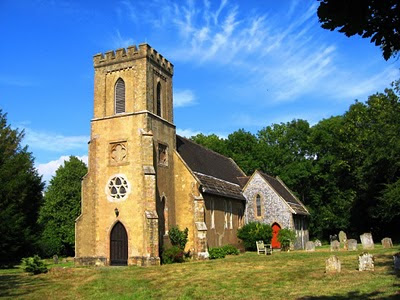 Surrounded by fields and just a scattering of houses, St John's has an idyllic setting, with fine views of the South Downs, close to the old moated manor house at Newtimber Place.

The church dates from the 13th century, but a rather severe Victorian restoration in 1875 by Carpenter and Ingelow resurfaced the walls, and renewed most of the windows. A watercolour in the nave shows the church before restoration. From the outside, the main feature is the pretty Gothick west tower, erected earlier in 1839, which replaced the original turret.

Inside, however, it still has the feel of an intimate village church, lit predominantly through tall lancets, some of which contain glass by Clayton & Bell. The base of the Jacobean pulpit has survived, along with two ancient carvings, now incorporated into the modern lectern; and a carved fragment of the mediaeval rood-beam, used as a shelf behind the font.

There are some interesting wall memorials: a poignant one to John Newnham who died aged just 12 "& near 6 months" in 1756, set in the small north transept chapel that was once housed the private pew of the Lords of the Manor at Newtimber; a grand wall memorial to a former Rector, John Osborne (d. 1774); and a series to the tragic family of Sydney Charles, Viscount Buxton (1853-1935), who lived at nearby Newtimber Place.

A Government minister under Asquith, Lord Buxton held various posts until becoming Governor General and High Commissioner to South Africa 1914-20. He is, however, perhaps best known as the President of the Board of Trade who had to defend the Government's policy on lifeboat regulations in the aftermath of the sinking of the Titanic.

He was the first and last to hold his title, all his sons predeceasing him: his second son Kenneth died in 1894, aged 7; his eldest son, Charles Sydney Buxton, died in 1911 aged 29; and his youngest son, Lieutenant Denis Bertram Sydney Buxton, died in action at Passchendaele in 1917, aged just 19. Charles is commemorated both in a wall memorial (complete with a rather striking profile), and a stained glass window of St Francis, designed by Mary Brickdale (1872-1945). His half-brother Denis has a splendidly romantic carved wooden memorial with a gilded knight in armour, set above the pulpit.

More tragedy was to follow in 1923 when Lord Buxton's daughter, Doreen Fitzroy, died a few weeks after childbirth, aged 25. She is commemorated in the best monument in the church, a sculpture of a mother and child by Sir William Reynolds-Stephens (1862-1943). A nearby slate memorial commemorates Doreen's mother, the Viscount's second wife, Mildred Anne Smith (d. 1955).

Outside, the churchyard has a tumble of table-tombs, some leaning at precarious angles. A recent addition is a black marble memorial to the sinking of the RMS Mendi in 1917, a troopship carrying 823 troops of the 5th Battalion, South African Native Labour Corps, including Chief Henry Bokleni Ndamase. The Mendi collided with the liner Darro in thick fog and sank in under 20 minutes, drowning the Chief and 670 men.