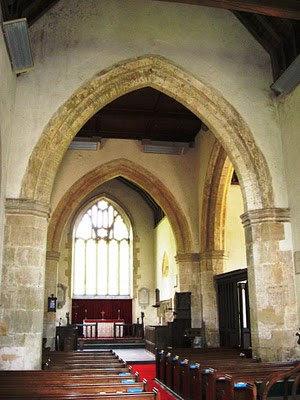 Poynings is a leafy village, nestled under the South Downs, north of Brighton. Its grand mediaeval church was rebuilt all in one go in the late 14th century, resulting in a building of rare architectural uniformity for so small a village.

The Domesday survey of 1087 refers to a church in Poynings, and there is little doubt that there was once a a Saxon place of worship here. The Norman building, erected on an impressive mound, stood for 300 years until the reign of Edward III. But in 1389, Sir Michael de Poynings, Lord of the Manor, left 200 Marks in his will for the erection of a new church, giving us the building we see today.

Although the rebuilding incorporated much of the old fabric, the new church was built in an early Perpendicular style, overseen by Poynings' son Thomas. The unusual width of the south transept, sometimes called St Mary's Chapel, reflected the desire to include the founder's grave within its dimensions. A porch was erected over the grave of the founder's grandson, Thomas of Poynings, who died in 1430, his coat of arms carved on the gable.

The only major post-Reformation work were 17th century roof repairs, as evidenced by a tie beam, now in the south transept, and the addition of new furnishings. The Victorian restoration was unusually sensitive, with only the placing of a screen to the south transept and the insertion, in 1843, of the south transept window, which itself dates around 1643 and was brought from Chichester.

From the outside, there is little anticipation of the grandeur inside: the walls are the usual flint, with stone dressings. The central tower is low and has small openings, and the churchyard crowds the building, hiding its dimensions.

The interior, however, is a dramatic space. The building plan is that of a Greek Cross, with nave and chancel of equal length, and generous transepts. The crossing itself dominates the whole, the steeply pointed arches springing from identical robust semi-octagonal responds. The windows are all two-light Perpendicular, except for a grand five-light East window and the later window in the south transept. The overall sense of space is rare, and gives some insight into what an unfurnished mediaeval church may have felt like.

Several windows have fragments of 15th century stained glass, the best being the east widows in the north transept, which depict the Annunciation, with the Archangel Gabriel in one light and the Virgin in the other. The detail is astonishingly well preserved - Mary stands in front of an urn with a rather elaborate lily growing from it.

Fittings and features of interest abound and include the triple sedilia and piscina in the chancel with ogee arches under square heads; the octagonal Perpendicular font with blank ogee arcading; the 14th century screen, now across the south transept; and altar rails dating from 1640, although the angel finials date from after World War II. These were carved by sculptor William Court, in memory of Anthony Stanislaus, an airman killed in combat. The carved pulpit is also Jacobean. The chancel contains two late 17th century family box pews, and the chancel steps include 13th century decorated encaustic tiles. The nave has indistinct wall paintings, with the Ten Commandments painted over earlier mediaeval pictures.

The south transept contains an old carved tie beam dated 1623 and bearing the name of Francis Killingbeck, a former rector who died in 1625. It is probable that he was responsible for repairs to the roof. On the transept floor are the remains of mediaeval tomb slabs, sadly now missing their brass fittings. They have been tentatively identified as those of Agnes de Rokesley (d. before 1346); Sir Michael de Poynings and his wife; Richard de Poynings, in full armour, who died in Spain in 1387; and an unknown couple from the 16th century. Opposite, the north transept is home to a beautiful four-wheeled funeral bier.