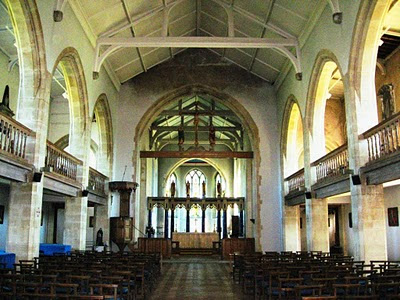 Littlehampton's parish church is a 20th century building built in a traditional style, and sits in a lovely tree-filled churchyard in the centre of the town.

There has been a church on the site since around 1110, which later (18th century) pictures show as a familiar Sussex amalgam of Norman and Gothic styles, with a tower and short spire. By the early 1820s, the building was in need of serious repair and was also too small for the expanding town, so a new church was begun in 1826, preserving some of the original elements, to designs by George Draper.

However, after a century of use, this 'new' church had itself become too small for the needs of the parish, and in the 1930s plans were drawn up to remodel and substantially enlarge the church, by the architect W.H. Randoll Blacker. He used much of the 1826 structure, encased in modern brick, but also added significant extensions of his own. It was completed in 1935-7, and it is this which we see today.

The exterior style is essentially a very plain, 20th century take on Neo-Gothic, executed in brick with stone dressings. The nave windows have Y-tracery with distinctive broad transoms which contain carved shields.

The tower is also very plain, but contains the clock-face from the Victorian church, as well as a 14th-century window from the mediaeval church set on the west side. (Interestingly, the listing regards this window as coming from the 1826 church, but pictures of the earlier church show exactly the same window in the mediaeval predecessor).

The interior is surprisingly spacious, with a broad nave, galleried aisles and transepts, and a west organ gallery. The chancel terminates in an apse which has its own westward arch.

Although the architectural style is predominantly Gothic, the main fittings (pulpit, gallery balustrades and chancel screen) are in a Classical 18th century style which, with the clear glass and pale walls, give it a more 18th century feel.

There are some other fittings of interest. The font, with marble columns, decorated with cherubs and fleur-de-lis, is from Draper's church. Memorials from the earlier churches line the gallery walls and there are several fragments of the Victorian stained glass inserted in the later windows.

The church received particular praise from Nikolaus Pevsner in his Sussex volume of The Buildings of England: he stated that the interaction of the fittings and space 'gives one a lot of respect for the designer'. Praise indeed. The building is Listed at Grade II.

Today, the church the centre of an active parish life, with a daily act of worship. The church is a member of the 'Forward in Faith' grouping.