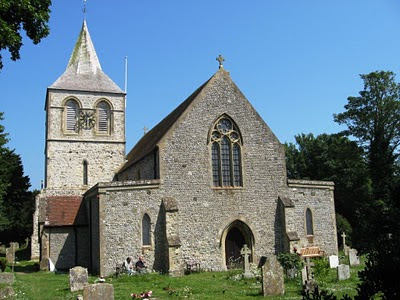 Most people visiting Pevensey get no further than the castle, but its mediaeval church is also very attractive and well worth a visit.
History

Although there is some architectural evidence of late 12th century work, the present chancel dates from the reign of King John 1200-1216, at the time the castle was being expanded, with the nave built a little later.

As Pevensey declined as a port, the church fell into disrepair, and the chancel was walled off from the nave in the 17th century, to be used for sheltering cattle, storing coals and hiding contraband brandy for smugglers! Restored tastefully in 1875-1900 under George Gilbert Scott Jnr, it remains an excellent and complete example of the Early English Gothic style.

From the outside, the church is built largely of flint, the most notable feature being the attractive tower, of three stages: Scott rebuilt the second stage and added the third, but kept the broach spire design of the original. The north chapel (built on the site of an early chapel) is also Scott's work.

On entering into the nave, the most striking feature are the wonderful arcades of double-chamfered arches, which rest on piers which alternate between octagonal and a clustered quatrefoil designs. There are five bays to the south, and three to the north, leading to a heavily buttressed tower arch. With the exception of the west window, all are lancets, including those of the tall clerestory. All is roofed off by a fine king-post roof.

The chancel is entered through a fine, tall Gothic arch of the purest form, with elaborately carved stiff-leaf capitals, which date it to around 1230. The chancel is almost as long as the nave, and has three elegant lancets at the East End, with another two lancets paired on the south wall, with attractive shafts and mouldings on the inside.

Fittings of interest include a 13th century stone coffin lid with a cross design in the south aisle, the crude Norman font, but most impressive is the alabaster monument to John Wheatley (d. 1616), which includes an effigy lying on his side. he contributed to £40 to the fitting out of a ship from Pevensey to fight the Spanish Armada. Two piers also have niches for statues, doubtless disposed of during the Reformation.