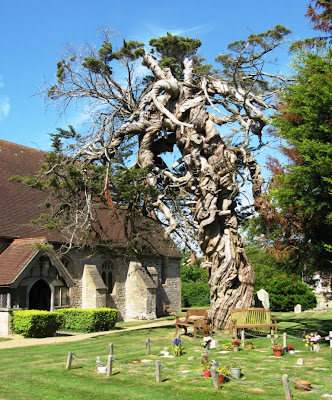 Birdham is a well-kept Sussex village, perhaps best known for Birdham Pool, once a tidal mill but now part marina and part nature reserve. But this is a tale of a church and a tree.
The church first. Dedicated to St James, it looks very attractive from the outside, situated next to a small, immaculately kept village green and a generous wooded churchyard. It dates almost entirely from the 14th century, save for the tower, erected in 1545, and the chancel, which was replaced in the rather severe Victorian restoration of 1882.

This severity is rather apparent on entering: the only features of particular historic interest are the 14th century chancel arch, and the impressive tower arch of 1545. Pevsner regards the latter as a puzzle, as the clustered shafts look earlier (c. 14th century) and appear too small for the Perpendicular arch above; he speculates that a smaller tower may have been projected, or built and replaced. The west window is also Perpendicular, and a nice feature. The tower contains two bells, one 14th century and one from 1695.

The only fittings of especial interest are some mediaeval 'pilgrim crosses', carved like graffiti on the outside of south door arch, and the east window, by artist Michael Farrar Bell and dedicated in 1978. It depicts James and John in their boat with Jesus and their father Zebedee, as described in the Gospel of Mark. Cameos in the background depict agriculture, Chichester Cathedral and a yacht in Birdham Pool.

Outside the porch, however, is a treasure from the natural world: a Macrocarpa tree, its trunk twisted into the most incredible form, looking for all the world like a strange being. It is possibly the most amazing tree I have ever seen.