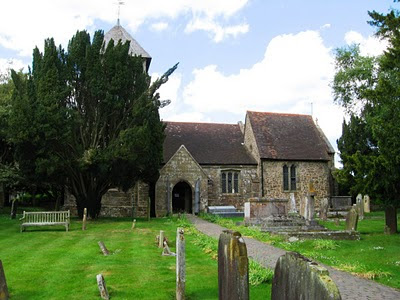 Tucked away on a dead-end lane a mile away from the modern village that bears its name, Wivelsfield’s church is a delightful amalgam of building from different periods.
History

Wivelsfield is first recorded as a village in an 8th century Anglo-Saxon charter as Wifelesfelda, and a church may have existed from around this date. There was certainly a church here before the Norman conquest, as the old Saxon North doorway testifies.

The church was first expanded in the 13th century, with an enlarged chancel, the south arcade of two bays and a south chapel. During the 14th century, the nave was extended westwards and the 15th century saw the south aisle wall rebuilt (c. 1500), along with a porch and the addition of the tower. A gallery was inserted in the west of the nave in 1716. Thus it remained until the Victorians removed the gallery and added the north aisle in 1869, thankfully preserving the Saxon doorway by incorporating it in the new north wall. They also added the porch and extended the chancel, incorporating the original East Window in the east end of the north aisle.

The most striking features on entering the churchyard are firstly a large yew on the left – supposedly over a thousand years old – and the original Saxon doorway. This is – in typical Saxon style – tall and narrow, with a carved arch of two orders, carved with simple reeding decoration.

The modern entrance is via the south porch, but before entering, take a look at the 14th century west doorway, and then the main south window of the tower: the arch has two carved label stops, on the left an owl and on the right a man playing a rather large wind instrument. Sadly, they are rather eroded. The church guide implies they may have been using Celtic imagery here, with the owl for wisdom and the music for joy and praise.

Inside, the south arcade of the nave is in classic Early English style, and the south chapel has a distinctive single lancet window with wide splays. The north arcade and aisle are clearly Victorian, but the east window of the north aisle, a triple lancet under an arch, is the former east window, re-set. The chancel and south chapel have piscinas and the chancel has what may be an Easter Sepulchre, with a small attractive stained glass window depicting St John the Baptist (now lit from the vestry behind).

The furnishings include a plain Victorian font and a pulpit. The base of the pulpit is taken from the original Jacobean sounding board, turned upside down.