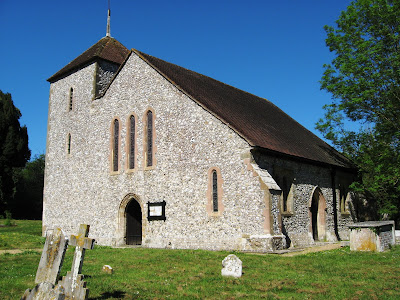 Clapham is a one-lane village nestling in the south face of the South Downs, just north west of Worthing. Its pretty and historic church is found up a gravel lane to the north of the village, surrounded by Clapham Wood, and is chiefly known for its impressive brass memorials and what is claimed to be the oldest ring of three bells in Great Britain.

Although the manor dates back to Norman times and possibly earlier, the present church is basically a replacement begun around the end of the 12th century and early into the 13th century. There is a continuous list of Rectors from 1257 to the present day, and the dedication to the Blessed Virgin Mary is recorded in 1405.

The nave dates from the late 12th century and is partly in the transitional style, but otherwise most dates from the 13th century, with additions in the 15th, including the present west door and a now-blocked north door. The shingled spire was replaced with the current roof in 1790, and the architect Sir Gilbert Scott undertook an extensive but sensitive restoration in 1873-4. In 1910, during work on the nave, a skull was found under the western pillar of the north arcade. It was replaced in its original resting place.

The church consists of a nave with north and south aisles, a chancel, and a squat tower, barely higher than the nave, at the western end of the north aisle. The exterior walls are made entirely of flint.

Inside, the difference between the earlier north and south aisles is immediately apparent: the north, of two bays, is Transitional in style, with round piers, stiff-leaf carving on the capitals and pointed arches. The three-bay south aisle is pure Early English Gothic, with simple capitals. A fragment of a blocked Norman window in the north arcade indicates that this must have been the original north wall before the aisle and arcade were inserted.

The three lancets in the west wall were reinserted by Scott, based on remnants found when removing a later and larger window which lit a gallery, which he also removed. The windows in the south and north aisles are essentially 15th century. The south aisle also has a small, low window at the east end which, by tradition, is a leper window, to enable those with the disease to follow services from outside. A local farm was a leper colony in mediaeval times, and a path from it to the church was known locally as ‘the leper path’.

Scott largely rebuilt the chancel, and in doing so reinserted the original lancets (for which sufficient evidence remained within the walls). The east window is 15th century. But the joy of the chancel is its memorials, in both stone and brass, to the Shelley family – distant relatives of the poet Percy Bysshe Shelley. Most impressive is the complete floor brass to John Shelley (d. 1526) and his wife Elizabeth, daughter of John de Michelgrove, in front of the communion rail. It has beautifully preserved 3ft high effigies, albeit in a rather simplistic style, heraldic shields and a representation of the Trinity, with God the Father seated behind a crucified Christ and a dove. Brass rubbing can be arranged on payment of a fee.

On the south wall are two more sets of brasses to the Shelley family: John Shelley (d. 1550) and his wife Mary Fitzwilliam, and their twelve children; and another to his son, John, shown kneeling in armour with his wife, son and daughter. Opposite is a recessed tomb, with carved figures of Sir William Shelley (d. 1548) and his wife Alice, and their fourteen children – seven sons and seven daughters, one of whom is shown as a nun. Sir William was a judge and is shown in legal costume, with a hood, and entertained Henry VIII at nearby Michelgrove House (sadly demolished in the 1870s).

The east wall of the chancel is decorated with tiles by William Morris, in place of a reredos. More figures in a similar style are stencilled in the window recesses. Other furnishings of note include some attractive brass chancel gates, a brass eagle lectern and a heavily carved pulpit, all late Victorian.

The tower contains a ring of three bells, named Jacobus, Catekina and Katerina Margarita. It is thought they were cast in Arundel around 1350, by Alan Rous, the son of one Nicholas le Rous, who moved there in the 1290s.

The church is now part of the larger parish which includes Findon and Patching.