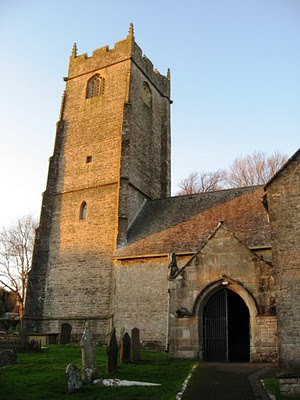 Tucked away to the south of Cowbridge, the prosperous village of Llanblethian feels more like a suburb of the larger market town, but Cowbridge was in fact founded (in the 13th century) within the older parish of Llanblethian. It is fitting, then, that Llanblethian has a very fine, well-preserved mediaeval church, located in an enviable position at the top of a overlooking the River Thaw and its newer neighbour.

The earliest documentary evidence for the church is a charter from the mid 12th Century, when it was a possession of Tewkesbury abbey. The current fabric dates from between the 12th and 15th centuries, the most notable additions being the tower (said to have been the gift of Anne Neville, wife of Richard III, in 1477) and a substantial late-Gothic porch with pinnacles. The inevitable Victorian restoration stripped the interior of its plaster, but it is still atmospheric and beautifully maintained. The church was originally dedicated to St Bleddian, the Welsh form of St Lupus, the 5th-century Bishop of Troyes who (according to tradition) accompanied Germanus on his visit to Britain in 429AD.

From the outside, the church presents a simple plan of west tower, nave and chancel, with a substantial south transept and adjoining south porch. The 15th century tower is reminiscent of those of Somerset, with stepped diagonal buttressing, pretty traceried bell openings, battlements and corner pinnacles. On entering, the interior is dominated by those stripped walls, but is softened by a beautiful roof, with sturdy arched bracing, and a generous collection of wall memorials dating from the 17th century onwards. Indeed, more ancient memorials cover the floor throughout, as well as the walls of the porch.

The chancel arch in the Early English style is clearly modern, but the tower arch is original, with two wonderful corbels of rather stout men in late 15th Century costume. The tower space contains a number of ancient tomb slabs with crosses, presumably from the tombs of earlier priests. The south wall of the transept incorporates a large Gothic niche containing a mediaeval effigy of a priest; investigations in the crypt uncovered a skeleton of a man - presumably a priest - holding a pewter chalice to his chest. The chalice is now in the church’s possession. Other fittings of note include an ancient wooden door in the north wall, a handsome modern wooden reredos, and some attractive Victorian stained glass.

The church will amply repay a visit; note that the roads in the village are both steep and subject to width restrictions.