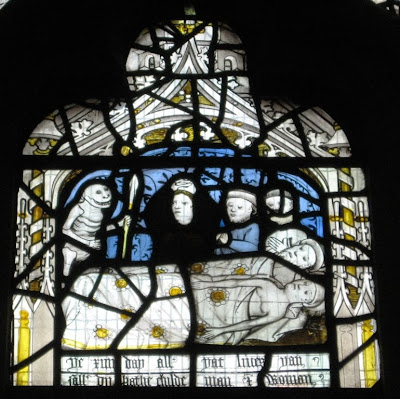 If you visit just one church in York (aside from the Minster, I suppose), make it this one. This fascinating little church, tucked away on the rather less touristy west bank of the Ouse, has much to interest visitors and contains one of Britain's most impressive collections of mediaeval stained glass.

There has been a church here since at least the 11th century, probably predating the Norman invasion. In the 12th century, the single-cell church was expanded with aisles, some of which incorporated Roman columns from the original Roman settlement of Eboracum.

The chancel was reconstructed in the 13th century in the Early English style, but a major rebuilding in the 14th century saw the East End rebuilt in the Decorated Gothic style, with the aisles extended to form a rectangular plan. Later in the same century, the tower and 120ft spire were built, and the fine chancel and aisle ceilings were added in the 15th century.

On entering, the church has a slightly rustic and homely feel to it. With no crossing, the nave is divided from the chancel only by the rood screen, and the aisles run uninterrupted from east to west. The arcades are in the simplest Early Gothic style, with simple capitals. One of the original Roman columns can clearly be seen between the north aisle and chancel.

But the main event is unquestionably the stained glass: almost all of it is mediaeval, and of very high quality. There is simply too much to describe here in great detail, but there is more information available on the church's website. But essentially, the north and south aisles and east end contain windows which are complete or almost entirely complete in their original form, and date mostly from the 14th and 15th centuries.

The most famous are in the north aisle: first, the 'Corporal Acts of Mercy Window' shows a bearded man (who may be the donor, Nicholas Blackburn, a merchant and mayor of York), carrying out six of the seven bodily acts of mercy, ie feeding the hungry, giving drink to the thirsty, offering hospitality to strangers, clothing the naked, visiting the sick and relieving those in prison. The final act (burying the dead) is omitted.

Next along in the aisle is the unique 'Pricke of Conscience' window, so named after a Middle English poem, written in the Northumbrian dialect, describing the last 15 days of the world. The panels depict the destruction of the world and the fate of humankind, each panel underscored with the relevant passage of the poem, and all intended to call people to repent. As you might expect, the images include some wonderful beasts, demons and devils, along with people in varying states of terror or torment. The families of the donors sit watching all this at the bottom of the window.

Finally, in the south aisle, look out for the bright and colourful 'Orders of Angels' window in the south aisle: in one of the lower panels is a man wearing a pair of very uncomfortable looking 15th century spectacles.

Other fittings of note include a fine 15th century memorial slab on the floor of the south aisle near the chancel arcade, and the imposing late 17th cetury pulpit. Don't forget to look up, either, to the chancel and aisle ceilings with their beautifully carved 15th century hammerbeams depicting angels and men of the church.

The church is in the Anglo-Catholic tradition, and Mass is said on Thursday at 12.45, and on Sundays at 12 noon and 17.30. The church is normally open for visitors in the middle of the day.