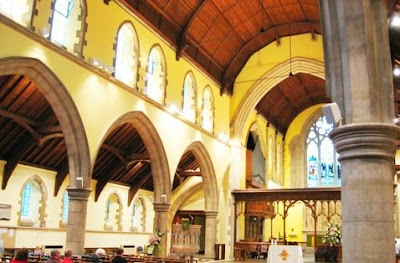 St John’s an impressive late 19th century church on the London Road just north of Preston Park in Brighton. Completed in 1902 to designs of the famous Victorian architect Sir Arthur Blomfield, it was extended with the addition of a chancel in 1926, and is a Grade-II listed building. It is one of the most prominent buildings on the approach to Brighton from London.

The church consists of a nave and chancel, with a baptistery and narthex at the west end. Built of ragstone, with a tiled roof, the exterior is dominated by a tall wood-and-lead fleche at the junction of the nave and chancel. The style is essentially Early English, with simple lancets throughout, except for the impressive Decorated Gothic East Window.

The church is entered through the baptistery and narthex, separated from the nave by a three-bay arcade. The nave is impressively spacious - both long and generously aisled, with an Early English style arcade of five and a quarter bays on round piers, and a tall clerestory. There are lancet windows in both aisle and clerestory in five sets of matching pairs. These are all filled with clear glass which, with the pale cream walls, gives the interior a bright and spacious feel.

A simple Gothic screen separates the nave from the chancel, which has a sedilia, an elaborately carved stone reredos and a mosaic tiled floor. Fixtures and fittings of note are limited to the impressive carved Gothic pulpit, a brass eagle lectern and attractive stained glass in the East window. The church has a busy parish life, and adheres to a liberal catholic tradition.