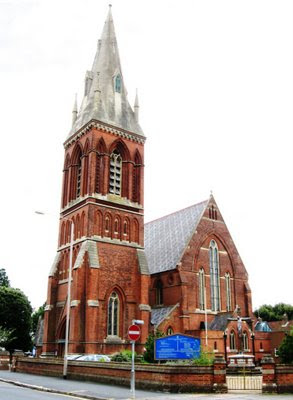 Pevsner’s Sussex volume of the Buildings of England is blunt: “Eastbourne, as against Brighton and Bournemouth, is poor in worthwhile Victorian churches. In fact, there is only one: Street’s St Saviour.”

Whatever one thinks of that view, there can be no disagreement that St Saviour is an impressive building. Its architect was George Edmund Street, best known for the Royal Courts of Justice on the Strand, and a favoured architect of the 19th century Oxford Movement, which espoused traditional catholic liturgy and theology.

For St Saviour, Street designed a building in his favoured Gothic style, mixing Early English and late 13th century styles in blood-red brick with ashlar trimmings. Begun in 1867 to replace a iron ‘mission’ church, the spire – its dominant external feature – marked its completion in 1872.

Moving inside, you are immediately struck by the sense of space: the nave is wide and tall, with generous aisles leading dramatically to an apsidal East End. The next thing to strike you, as your eyes adjust to the light, is the decoration: the interior abounds in it: glass, mosaics, tiling, murals, painting and marble. Most of this was executed by the firm of Clayton & Bell (normally better known for their stained glass), with marble by the Italian form of Saviati. 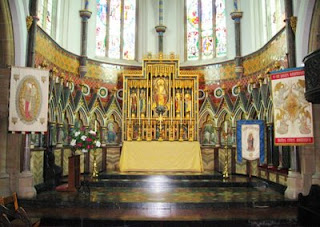 The decoration reaches its climax, appropriately enough, in the sanctuary, where the scheme is almost overwhelming in its richness and complexity. The gilded reredos (1937) is by W H Randolph Blacking, and is dedicated to Henry Urling Whelpton, second incumbent and son of the first Vicar: in any other church it would dominate, but here must jostle for attention. More restrained, but equally impressive, are the murals over the chancel arch, painted directly onto the brick, and depicting Christ in glory with saints and angels.

There are two chapels: that on the left is dedicated to St Peter, in recognition of the parish absorbed by St Saviour’s in 1972, and on the south side the memorial chapel to its first Vicar, Henry Robert Whelpton. The baptistery at the west end houses an onyx font designed by Street and has murals depicting St Augustine preaching at Canterbury and St Oswald.

As one might expect, the church has a vibrant parish life, with worship in the Anglo-Catholic tradition. Happily, they keep their church open daily for private prayer.