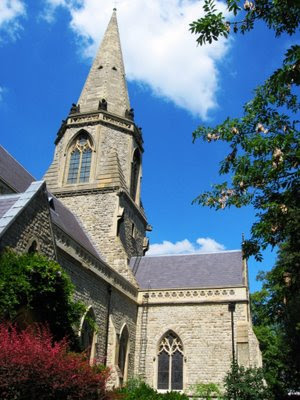 Surrounded by some of the most expensive real estate in the world, St Mary’s nevertheless looks like a country church parachuted into central London, almost disappearing behind the dense trees and hedges of the central garden of the Boltons.

The church itself is the work of the architect George Godwin, and was constructed 1849-50 on the then developing Gunter Estate. It was largely financed by the first incumbent, Rev Hogarth Swale.

The church is largely in the Decorated Gothic style, with an aisleless cruciform plan. The exterior is very attractive, of Kentish ragstone and Bath stone dressings, with a short tower, octagonal lantern and spire (added in 1854). It sits in the middle of a lozenge-shaped garden, with park benches for visitors to admire the prettily kept gardens around the church.

After such a gentle introduction, the interior comes as rather a shock: it is severely whitewashed, and rather bright, as much of the stained glass was removed after War damage. The dark, heavy roof is supported on carved corbels showing the apostles, although these are hard to see through the whitewash. The altar was moved forward to the crossing in 1952, and the chancel turned into a Lady Chapel. I’m not convinced this presentation works: it feels, to me at least, in need of some colourful banners on the nave walls to liven it up.

Still, it retains its oak pews, and has an interesting and attractive bronze Pieta by Naomi Blake in St Luke’s Chapel (installed for the 150th anniversary celebrations), as well as Godwin’s original font. A few Victorian stained glass windows also survive, although the most notable is the bold, almost primitive-style East window by Margaret Kaye, inserted in 1955.

I had a very friendly welcome on my visit, and the church itself is the centre of a busy Parish, with services in 'the best liberal Anglican tradition’, according to its website.