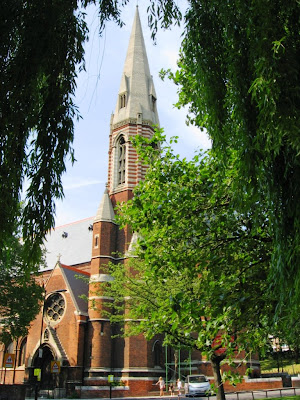 Not to be confused with the nearby church of St Mary, Paddington, St Mary Magdalene hugs the banks of the Grand Union Canal west of Little Venice. Designed by George Street, it is one of the most remarkable neo-Gothic churches in London.

The church was built from 1867 onwards for the Rev Dr Richard Temple West, then curate at All Saints, Margaret Street, to bring the ‘high’ Tractarian style of worship to what was then a poor community living in overcrowded housing. The street plan severely constrained the site, for which Street’s solution was the long, tall narrow design we see today. It’s hard to appreciate now what it must have looked like originally, since the surrounding streets have long since been replaced by a modern housing estate, and the church is now mostly surrounded by green space.

The church is built in red brick, in Street’s preferred Decorated Gothic: the most striking exterior feature is its slender octagonal belfry, surmounted by an elegant spire, which emphasises the height of the nave and polygonal apse, and forms a distinctive local landmark.

Inside, more of Street’s ingenuity is apparent: the South aisle is generous, but with insufficient room for a north aisle, there is instead an arcade with just a narrow passage behind, and the two arcades are different: the south aisle has conventional arcade on clustered piers, the north with arches on octagonal piers, with a pair of arches within each bay on a slim colonnettes. Both arcades carry large statues of saints under elaborate canopies.

However, the glory of the church is its lavish decoration and furnishings – too extensive to describe in detail, but there are paintings, mosaics, memorial brasses, abundant statuary and wall tiling, and a complete scheme of stained glass by Henry Holiday, a friend of pre-Raphaelite Burne-Jones. The north and south windows are particularly attractive and depict Saints with British connections.

Even the ceiling is painted, with a scheme by Daniel Bell (1873) showing saints and Biblical characters connected with the months of the year. Other artists and artisans included Ninian Comper, Thomas Earp, Martin Travers and Salviati. The crypt (which I have not seen, and to which access is limited) contains the Chapel of St Sepulchre, created as a memorial to Father West in 1894, again by Comper.

Aside from services, the church is usually open on Thursdays, and is well worth the short walk alongside the Grand Union Canal from Little Venice.