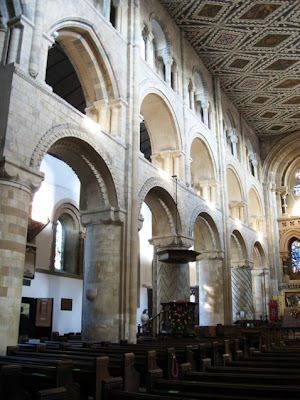 When you think of this part of the Lea Valley, you might think of the Reservoirs, the Country Park or the delightful Lea and Stort Navigation Canals. Or you might think M25, industrial estates and some of outer London’s more dreary suburbs.

Or, if you’ve visited Waltham Abbey, you’ll think of one of Essex’s most interesting churches; a Norman architectural gem, steeped in history from the time of the Saxons, the site of one of England’s greatest monasteries, and the burial place of King Harold, after the Battle of Hastings.

The site has a very ancient history: There have been five churches on the site, and what we see now is - oddly - the fourth. (More on that later.)

The story starts around 610AD, with the construction of a simple Saxon church. This was rebuilt by the 8th century, and would still have been standing when the local landowner, Tofig, standard bearer to King Cnut, brought to it a miraculous Holy Cross. This was actually a black crucifix unearthed at his estate at Montacute in Somerset, but it quickly became associated with miracles of healing.

The third church was built by the local Lord, Harold, Earl of Essex, who later became King Harold II. Injured in a skirmish in Wales, he attributed his healing to prayers said over the Holy Cross. In recognition, he had a much larger church built with wide transepts, endowed with lands and established as a college of Canons. It was consecrated in the presence of King Edward the Confessor in 1060. Alas, it was not enough to save Harold at the battle of Hastings in 1066, but afterwards his body was brought here for burial from the battlefield, having been identified by his mistress, Edith Swan-neck.

Harold’s church did not last long: it was rebuilt by the Normans between 1090 and 1150 in the Romanesque style, and it is essentially this church that we see today. The church had links to Peterborough and Durham, and the distinctive architectural style of both of those is evident in its interior.

In 1177, the church was re-established as an Augustinian Priory by Henry II as part of his penance for the murder of Thomas a Becket. The Norman chancel was pulled down to extend the Nave, and a completely new Chancel built. This huge church - over treble its current length and with two sets of transepts and crossing towers - became one of the wealthiest foundations in England, and enjoyed Royal patronage from Kings visiting the nearby hunting grounds of Epping Forest. Even Henry VIII endowed it with fine glass, and it was the last monastery to be dissolved, in 1540.

Being last did not save it, however: The monastery church of Henry II was completely pulled down except for a small chapel, leaving just the nave and the original crossing tower, and even this fell down a few years later. The nave then began to lean, and a tower was built in Queen Mary’s reign at the west end to act as a buttress.

A major restoration by William Burgess in 1860 gave the church a sumptuous new East End, and also a painted roof - a copy of that in Peterborough. The Lady Chapel - originally a funeral guild chapel built in the 14 century - was also restored, unveiling a complete 15th century Doom wall painting on its east wall. The undercroft - then a prison - has since become a shop and visitor centre.

The Tudor west tower makes an impressive sight on the approach from Waltham Cross, but the exterior - apart from the fine decorated Gothic windows of the Lady Chapel - is something of a patchwork of later repairs. A Victorian statue of King Harold adorns the west end of the south aisle, and to the east and north the remains of the monastery - extensive, but hard to decipher - now sit in the extensive Abbey Gardens. The best preserved are a small section of vaulted cloister passage and the Abbey Gate. Behind the church is a grave marker, identifying the supposed burial place of King Harold, on the site of the apse.

The entrance under the tower reveals original West Door, rebuilt in the 13th century in the Gothic style. Entering through this is a moment of high drama: the Norman nave makes an immediate impact, with its piers decorated with spiral and chevron patterns, as at Durham. This leads to Burgess’s sumptuous East End, all under the astonishing painted roof.

Closer inspection reveals that the first bay of the nave was rebuilt in the late 13th century in the Gothic style, removing the gallery: this work was abandoned when the changes were found to be damaging the structure. The work left a single pointed arch but with the gallery intact in the second bay of the north arcade. Otherwise, the arcades are robustly Norman, with arches of vigorous zig-zag and dogtooth decoration.

The new sanctuary was formed between the sixth bay at the east end. For the new East wall, Burgess placed a rose 'wheel’ above three lancets: the glass is by Edward Burne-Jones and depicts prophets and a Tree of Jesse. Below the window is a frieze of Aesop’s fables (a favourite of Burgess - they also appear at Castell Coch in Cardiff) and below that is a Reredos of the Nativity - varved by Thomas Nicholls. The ceiling - painted by Edward Poynter in 1860 - depicts the 12 astrological months of the year and their labours. Together, they form an important and impressive collection of late Victorian church decoration.

There are several furnishings of interest. These include the 12th Century font of polished Purbeck Marble; an oak pulpit beneath a suspended sounding board from 1658; and a 14th century wooden screen at the east of the north aisle. Behind this is a fine tomb, of one Robert Smith (d. 1658). He was a sea captain, and the front of his tomb has a panel showing the Ship of Industry evading the Rock of Sloth. Adjacent to this on the floor is the sole remaining memorial to an Abbott, from the late 13th or early 14th century, minus its brass.

In the south aisle, the most impressive tomb is that of Sir Edward Denny (d.1600), lying in full armour, and his wife. Below are their ten children - the two girls on the right hold hands to show they were twins. Next to this is the effigy of Lady Elizabeth Greville (d. 1619): the remainder of her tomb was demolished to make way for a gallery, no longer extant. At the other end is a memorial to Sir Hereward Wake (d. 1916), a descendent of Hereward the Wake and Lord of the Manor.

Finally, the Lady chapel offers a contrast in Decorated Gothic, flooded with light through 1930s stained glass. The 15th century Doom is vividly painted and, although some of the detail is hard to make out, Christ in Majesty can clearly be seen in the centre, with the saved going towards the New Jerusalem on the left, and the damned being prodded by devils into the mouth of a beast on the right. On the west wall is a fine window with rare double tracery.