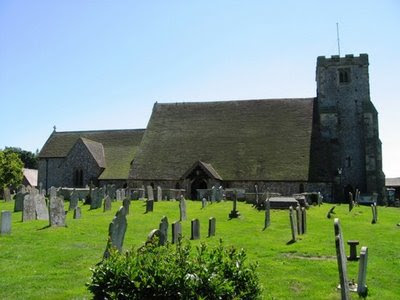 Modern Lyminster is a charming village on the northern outskirts of Littlehampton, bisected - and rather spoiled - by the A284, which sees traffic thundering through it. (A bypass seems rather overdue to me).

This is all a far cry from its origins. First mentioned in the will of King Alfred the Great in 901AD, it has a Benedictine Nunnery, and in the reign of King Athelstan of Wessex (AD925-939), ‘Witans’, or advisory councils, were held here, though nothing remains of Athelstan’s presumed palace. After the Norman conquest, the Nunnery was refounded as a Priory, of which nothing now remains. Except, that is for the church: the nave was the parish church, and what is now the chancel was the Nun’s church. The result is a tiny village with a huge church, much of it dating from before the Norman Conquest.

From the outside, the most striking feature is the nave roof. A feature of Sussex churches are roofs which sweep uninterrupted from the apex of the Nave over the aisles and finish above a low wall. But, even by Sussex standards, Lyminster’s is huge. It is now tiled, as the original, heavy Horsham slates were taking their toll on its structure. 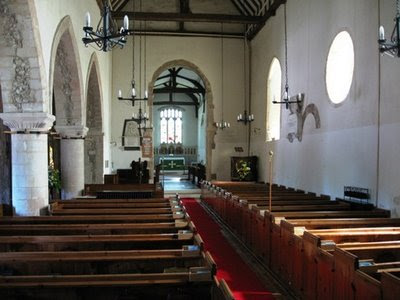 Inside, the nave (above) dominates: dating from around 1040, it is tall, narrow and dramatic. It contains some Early English lancets and circular sexfoil window, said to date from 1260. Below this is the original Saxon south door, the remains of which can also be seen outside, together with the later, lower Norman door. Both are now blocked. The chancel arch continues the theme – again tall, narrow, startling - and oddly with two sets of abaci. It is speculated that the lower pair were added to match the new aisle in 1170.

The low north aisle was added around 1170, with an elegant Transitional Gothic arcade of four bays. Two of the piers have capitals with plain scallop decoration and the third has stiff-leaf carving at each corner. The fine Crown-post Nave roof is thought to date from this time, too. The aisle roof was replaced around the 15th century, which was also when the north porch was added.

The Chancel also dates from 1040, but the east window is Perpendicular and dates from around 1420, and there is a piscina and aumbry dating from the 12th century. The large south lancet windows are Victorian, but that on the north wall is older, and may have replaced a door into a side chapel. The West tower completes the survey, and was built in the 13th century, and raised again in the 15th.

After all this drama, the furnishings struggle to compete. Both nave and aisle have attractive box-pews, and the font dates from the 12th century, with a square block of Sussex marble resting on a central pillar and four corner columns. At the rear of the North Aisle is a curious model of ‘Jerusalem in Jesus’ time’, and adjacent to the font are two ancient stone coffin lids.

One of these lids is associated with a local legend: near the church is a pool called the ‘Nucker Hole’. This pool is always icy cold, and its level never changes, suggesting it is fed from a spring. The legend states that it was bottomless, and the home of a dragon, which caused much local chaos. Until, that was, a brave young boy called Jim Pulk (or a gallant knight in other versions) rose to the challenge and slayed the dragon. His tomb is the one east of the font. Interestingly, ‘Nucker’ may derive from the Saxon word ‘Nicor’ which means a ‘sea-monster’, so the legend may go back a very long way.