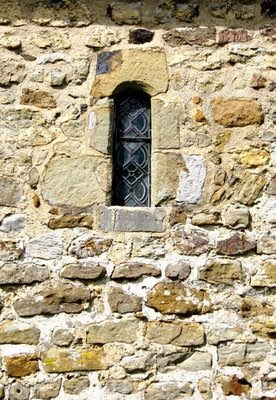 Bolney is a village surrounded by big roads: just to the east is the motorway-like A23 from Brighton to London, and to the south is the A272 from Haywards Heath to Winchester. But it succeeds in hiding itself from both.

The village is not mentioned in Domesday, but certainly dates from at least the 11th century. Its few streets are narrow lanes, and many of the houses are ancient - dating from the 14th to 16th centuries, although its popularity with commuters has inevitably resulted in some newer building. But the main thoroughfare is still called simply 'The Street’, recalling simpler times.

The oldest parts of its church, just to the east of the street and dedicated to St Mary Magdalene, date from the period immediately after the Norman conquest. However, the impression once inside, past the pretty 18th century porch, is of a rather scrubbed interior, much Victorianised. So some detective work is needed to reveal its history.

The first thing to notice is the tall, narrow arch of the south door, inside the porch. This is Norman Romanesque, and has two orders of primitive reeded banding over the arch for decoration. A walk around the outside reveals two small Norman windows in the chancel, alongside later replacements. In fact, the south wall and the chancel are the oldest parts of the church, and date from around 1100. The walling is in the lovely local stone, all golden browns, ambers, greys and creams, and shades between.

At some point around 1300, a new chancel window was added, a perfect example of early Gothic 'Y’ tracery, with a 'bulls-eye’ oriel window above in the rafters. Another trefoil-headed light in the south wall of the chancel is later, 13th century. Unfortunately, the chancel arch itself was tidied up by the Victorians when they added the large north aisle (1853); the handsome, plain three-bay arcade supported on rounded piers between the nave and aisle is therefore also from this date.

Records show the attractive tower was built in 1536-38: it was paid for by one John Bolney, and his coat of arms are carved above the handsome Tudor Gothic west doorway. Above it is an attractive Perpendicular window from the 15th century. According to Pevsner, the distinctive conical pinnacles on the tower corners may date, perhaps, from the 16th Century. The little porch was built in 1718; the date is carved above the door, as well as the names of the Churchwardens: Drury Bird, John Dunnett (or Dennett?) and Thomas West. Above this is a sundial dated 1850, making a most attractive composition.

The furnishings are mostly modern, and include a rather peculiar font. The Royal Coat of Arms on the south wall of the Nave depicts those of Queen Anne (reigned 1702-1714).

Outside is an attractive sloping churchyard, full of 17th and 18th century table tombs and planted thickly with trees. To the east is the village cricket ground, and on my visit the air rang to the sound of leather on willow; what could be more quintessentially English than this?