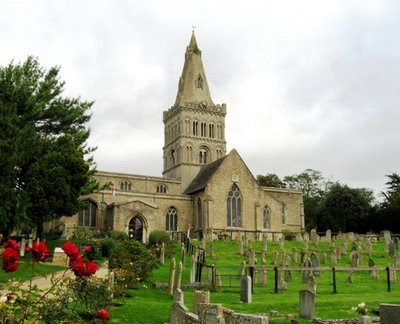 The village of Castor, sandwiched between the suburbs of modern Peterborough and the A1 is a quiet and peaceful place today, with streets of neat stone houses, a few pubs and a church. But it has had a long and eventful history from the Roman period onwards, and this is reflected in the quality and historical importance of its church.

In Roman times, the whole area was an important industrial site, making 'Castor Ware’ pottery, adjacent to the Roman road of Ermine Street, which ran from London to Lincoln and York. Nearby was the Roman town of Durobrivae, but at Castor a huge palace was built - the second largest in Britain - equipped with baths and all sorts of other conveniences. Some of the remains can be found around the churchyard - the adjacent school is built on the site of the baths. The palace formed a convenient stopping off point for visiting Emperors on their way around the province of Brittania.

The palace was inhabited from around 250AD until 450AD, before being abandoned. In 650AD, Kyneburgha, widowed daughter of King Penda of Mercia, founded a Saxon convent among the ruins. Kyneburgha herself is the source of an interesting miracle: it is said she was being chased by two men intent on raping her. As she ran, the contents of her basket spilled out and instantly grew into trees and bushes which caught the pursuers in their branches. Another legend also has her being chased by a thief, but a path unrolled before her to help her escape, and flowers sprang up from where she placed her feet.

Historically, St Kyneburgha was the convent’s first abbess and she and her sister St Kyniswitha were buried in the church. However, the church was attacked by Vikings some time between 850 and 1000, and in the 11th century their remains were moved to Peterborough.

The church survived, but was largely rebuilt in the Norman period and dedicated in 1124. Around 1220 it was extended with a south aisle and a new chancel, and around 1260 the south transept was replaced by a large chapel with an east aisle, and in the early 1300s a north aisle was added. A broach spire was added to the tower around 1350, and the nave clerestories - and the famous angels decorating the ceiling - were inserted in the mid-15th Century.

Pevsner called St Kyneburgha “the most important Norman parish church in the county (of Huntingdonshire)”, and indeed the first thing to strike any visitor is the tower: the exterior is carved in the Romanesque style with extraordinary richness, with two rows of arcades, fish-scale decoration on the surface and two corbelled friezes above. It is the equal of any cathedral.

The exterior also has a priest’s doorway into the chancel, above which is an inscription recording the dedication of the church on the 17 April 1124 (or possibly May 1114, depending on which expert you follow!). Above the entrance to the porch is a Saxon carving of Christ in Majesty, and inside is an elaborate Norman doorway with a heavy wooden door dating from 1372.

Inside, it’s hard to know where to start first: the tower crossing is the obvious place, for here the great Norman arches (1100-1110) have a series of fantastic carved corbels, showing a 'Green Man’ (with foliage growing from his mouth), hunting scenes, men fighting dragons, lions and other beasts, a bird fighting a serpent and the legend of St Kyneburgha. The scenes are wonderfully vivid and dynamic - definitely Norman, but with stylistic elements from the pre-conquest period.

In the south aisle is the base of a Saxon cross and at the east end the altar of St Kyneswitha, below an elaborate stone screen of 1330. Next to this is an 8th or 9th Century Saxon carving of an apostle under arcading, part of the original shrine of St Kyneburgha. At the other end of the aisle is a well-preserved 14th century painting of St Catherine, complete with her wheel and the execution of the philosophers she had converted.

The chancel is also of interest: it contains windows from virtually every period from Early English to Decorated and Perpendicular Gothic, as well as fine Norman and Gothic piscinas and the tomb of Vergilus, an early Rector, c. 1228. 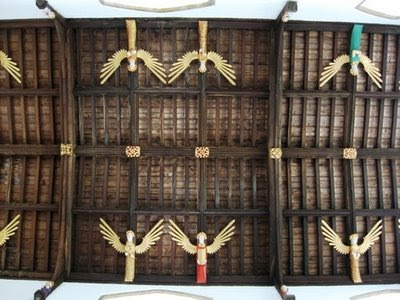 Last, but definitely not least, the other glory of the church is to be found by looking up: the roofs of the Nave and aisles are decorated with 66 huge figures of angels playing instruments, which date from the 15th century and are vividly painted. (See above)