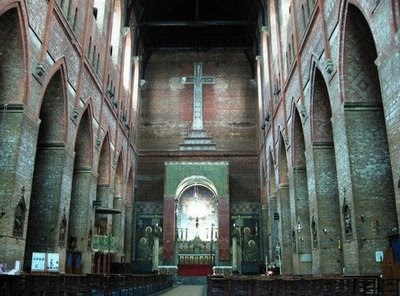 Pevsner’s ‘The Buildings of England’ describes St Bartholomew’s as ‘an unforgettable experience’, and it’s hard to better that description.

This huge Victorian Gothic edifice, just outside the centre of Brighton, is one of the most dramatic parish churches in the UK, with one of the highest naves in Europe. At 135ft (41m), it is just 7 feet lower than that of Cologne Cathedral. For many years, it dominated the view to the east as you arrived by train into Brighton station. (Alas, a sight no longer available thanks to the erection of some appallingly dull blocks of offices and flats).

The building was the brainchild of Father Arthur Douglas Wagner, (1824-1902) himself son of the Vicar of Brighton, and a colourful local character: a wealthy young man, he was ordained in 1849, and became priest of St Paul’s, Brighton (see separate Qype entry), which his father had essentially built for him. A leading Catholic Revivalist, and determined to develop a ministry to the poor, A D Wagner was to build several churches in Brighton, all out of his own pocket. Of these, St Bartholomew’s is the best known.

Built in 1872-74 to designs by a local architect, Edmund Scott, St Bartholomew’s is in a plain Gothic style, and of brick throughout. The church is aligned north-south, with the main (ritual West) entrance on Ann Street. Standing in front of this gives a good foretaste of what is to come: a towering brick facade, containing a truly huge Rose Window, it completely dominates its surroundings.

Once inside, the eye is immediately drawn upwards and forwards: the wooden wagon roof simply disappears in darkness, and nine bays of huge pointed arches lead the eye to a sanctuary containing an enormous baldachino, 45ft (15m) high, covered entirely in marble. The arches each contain a shallow chapel with a single lancet, with another lancet in the clerestory above. Polychromatic bricks are all that relieve the scale, for there is virtually no other ornament in the architecture. The accumulated grime on the walls gives the interior a dark and mysterious feel.

The intended chancel was never built, and instead a sanctuary was created at the east end of the nave. This accommodates the baldachino and a huge pulpit – also of marble – both by the noted arts and crafts designer, Henry Wilson (1864-1924). He also designed the Lady Altar – also known as the silver altar – with a repoussé frontal of silver plate on copper – and the pair of pillar-sized candlesticks either side of the altar.

The whole effect is breathtakingly dramatic, and perfectly suited to the high Anglo-Catholic ritual and superb liturgical music, for which the church is renowned. The church has an active and busy parish life, and a weekly mass for the attached junior school. A constant stream of visitors from around the world walks through its doors daily, to see this astonishing building for themselves.