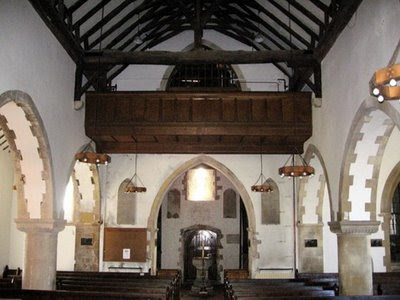 Despite being surrounded by modern housing estates, the old village centre of Portslade still retains a villagey feel: indeed, the approach from the busy A270 Old Shoreham Road is quite a shock: a sea of modern car showrooms gives way to a village green with winding lanes, cottages, a post office and two pubs.

At its centre is the parish church of St Nicolas, one of the oldest buildings in Brighton & Hove. Built in the Norman period around 1150, it was substantially enlarged with a new chancel and tower around 1250. Apart from the addition of a remarkably sensitive north aisle by the Victorians, it remains substantially a church in the Early English Gothic style.

From the outside, it is entirely conventional: a short west tower, a single roof covering both nave and aisles, covered in Horsham Slate, a smaller tiled chancel, and a south porch. It really could be in any Sussex village. Inside, the oldest part of the church is the south aisle wall and the south nave arcade: of three bays, the two piers are typically Norman: heavy, round, and with square scalloped capitals, with the shallowest of pointed arches. The aisle windows were altered to lancets around 1250, when the chancel and tower were added.

Until 1847 there were early mediaeval wall paintings on the south arcade of the Nave, depicting a ‘Doom’, with the souls of the good and the damned moving to heaven and hell, either side of Christ seated in Judgement. Unfortunately, these were whitewashed shortly afterwards.

The chancel is particularly attractive: the two lancets with a sexfoil window above on the east wall are nicely balanced, and it has a fine sedilia (seats in niches for the priest and his assistants) and piscina on the south wall. The tower – with rough stone walls – also has an attractive high lancet window.

The north aisle was added in the latter part of the 19th century but, apart from being wider, it is an almost mirror image of the south aisle, down to the scalloping on the capitals. The east wall repeats the motif from the chancel of two lancet windows, this time below a trefoil window, but the west end is given over to the Brackenbury Chapel, erected in 1874 for Miss Hannah Brackenbury (also spelt Brakenbury) and her brothers and niece. This contains heavily stained glass windows, and is separated by a large mullioned glass screen from the body of the church.

The interior is well lit, as few of the windows are coloured. Furnishings are limited, but there are some handsome 18th century memorials on the aisle floor, and a pair of formidable skulls from another memorial (presumably 17th century?) in the south aisle floor.

Overall, this is a lovely spot and a heaven of peace and quiet away from the anonymous sprawl of suburban Brighton and Hove. The church is part of a very active parish: detailed of services and other activities can be found on the website.

To the north of the church are the scant remains of Portslade Manor House, one of the few examples of a Norman Manor surviving. Unfortunately, much of the fabric was pillaged to build a Victorian folly ‘ruin’ further north. The remains are nevertheless of national importance and it is a grade II* listed monument.