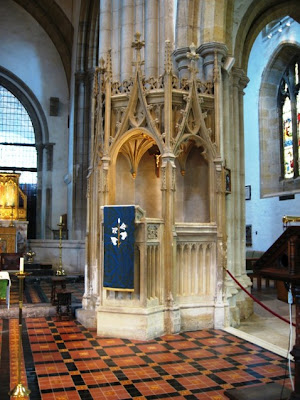 This large and historic church is deceptive - and unique. Deceptive, because although the church looks large from the outside, on the inside it is split at the crossing, with one half screened off and accessed only through the castle; and unique, because the parish half of the church is Anglican and the Castle half (the Fitzalan Chapel) is Roman Catholic.

In terms of architecture, the church was rebuilt completely in 1380, in an early version of the Perpendicular Gothic style. Until 1544 the church was divided by a screen, with what is now the Fitzalan Chapel being used by the monks of the adjacent Priory as their church.

After the dissolution, the chapel fell into disrepair, and was only restored in the 19th century, when the Duke of Norfolk erected a wall in 1874 following a dispute over ownership - the Fitzalan Chapel houses the spectacular tombs of the Dukes of Norfolk and their ancesters, the Earls of Arundel. The wall was removed in 1968, and the mediaeval screen now once again serves its original purpose.

The nave is an elegant structure, with the Perpendicular design being given extra rhythm by having the aisle windows framed in tall recesses which run down to the floor. Unusually, the clerestory windows are small quatrefoils (rather like a four-leaf clover). The decoration and furnishings are interesting: there is an attractive 14th century octagonal font, and the north aisle wall bears traces of wall paintings, with two wheel designs containing rather faint remnants of the Seven Deadly Sins and another, the Seven Works of Mercy.

The stone pulpit is most impressive and, although restored in the 19th century, dates back to the 14th century as well, and is one of the few remaining mediaeval stone pulpits in the country. The chancel, located under the crossing, has a most splendid pattern of encaustic tiles, presumably to a Victorian design. Finally, the iron grille separating the two halves of the church (behind the altar) is a rare and complete survivor of pre-reformation metalwork.

Moving into the other half of the church, the Fitzalan chapel is a splendid example of a Perpendicular chapel. It is dominated by a splendid seven-panel east Window, and its wooden vaulted roof, rebuilt in 1886 but incorporating the mediaeval roof bosses.

On the floor are numerous 15th century brasses, but this interior is dominated by the 15th and 16th century tombs of the Arundels and Norfolks, befitting their position as the most senior nobles in England, and of their 19th century counterparts, buried here after the Chapel’s restoration. For a closer look, you will need to enter via the castle.