Saint Michael and All Angels, Southwick 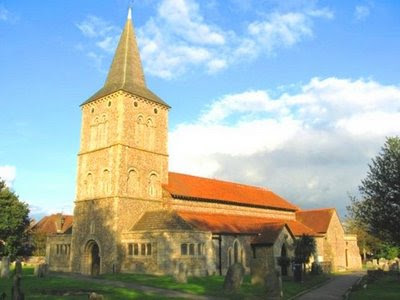 Southwick is now firmly part of the suburban sprawl running from Brighton and Shoreham, and is known to most people for the power station that dominates the far side of Shoreham Harbour. But there was a community here in Saxon times, and its church is surprisingly ancient.

In fact, the walk from the station crosses the Green, an attractive and villagey stretch of tree-lined common which splits Southwick into two halves. There are some handsome cottages surrounded by well appointed semi-detached suburban homes, and a rather less appealing row of post-war shops.

St Michael and All Angels was, until the 18th century, dedicated to St Margaret, and sits among a very pretty churchyard, thickly studded with trees. Although there was probably a church here in Saxon times, it was first recorded in 1086. In 1206 the right to appoint the rector was granted to the Templars, and then to the Hospitallers, although much of the early mediaeval period was taken up with disputes over these rights with the monks of Sele Priory.

The ownership passed from Sele Priory to Magdelene College at the Dissolution, and patronage thereafter passed to the Crown until the 20th century. Fire in the 19th Century damaged the nave and an unexploded bomb (and the subsequent excavation to remove it) damaged the tower in 1941.

The church itself is built of flint, and is essentially in three parts: the tower, nave and chancel. The tower is by far the most impressive part: its foundations and lower walls are said to be Saxon, although it mostly dates from the late 12th and 13th centuries.

It is an attractive composition, with paired round-headed arches with narrow openings surmounted by paired gothic lancets and, above that, a shingle broach spire. The west door is also attractive, but a modern addition: the tower was carefully taken down and faithfully rebuilt in 1950 after the bomb damage, with vestries built either side.

The chancel is mostly 13th century, with two original lancets, framed by a 14th century chancel arch. There are two round headed arches to the south, although the central column probably dates from the Victorian rebuilding. A 14th wooden screen with narrow lancets also survives in the south aisle.

The nave burned down in the 1830s and was rebuilt with narrow lean-to aisles in 1834, with round-headed arcades and lancet windows. Pevsner’s Buildings of England described the nave as a ‘loveless cover for pew-space’, which I think is a bit harsh, although there’s no doubt it doesn’t match the quality of the tower.

The furnishings – other than the south aisle screen - are limited in interest to what appears to be a mediaeval aumbry, some 18th and 19th century tombs and memorials, and a sturdy, square font, probably from the 13th century.

The church is today the centre of large and busy parish, and has a vibrant church life, with services daily through the week.