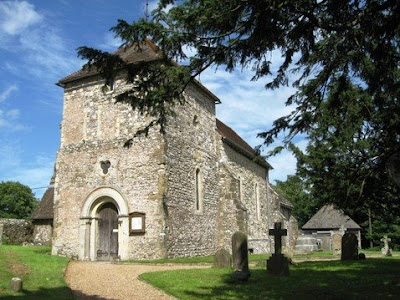 Sullington’s ancient church is situated at the end of a mile-long lane, south-east of the modern village of Storrington. The lane turns south off the busy A283 road and, immediately, you feel far from the modern world. It is like a journey back in time, and one of the loveliest corners of Sussex I have visited in quite a long time.

The church itself is located next to a sprawling farm, which has an impressive 17th century tithe barn. It is surrounded by a church yard full of ancient yews, with lovely, sweeping views up to the South Downs. It is listed at Grade I.

The church is also ancient, dating from around 1050. The stumpy tower show signs of Saxon ‘long and short’ work, with corner stones laid alternately horizontally and vertically, and the nave - tall, long and narrow, could also only be Saxon. The main west door (there is no porch) is clearly early Norman, but has been rather over-restored.

Much of the rest of the building was rebuilt around 1220 in the Early English style, with tall single lancet windows. The exception is the East Window, a delicate Decorated Gothic design from 1295. There is a small chantry chapel on the north side, dating from 1389, separated from the nave by an elegant two-bay arcade. A very wide 13th century arch separates nave from the chancel, on the right hand side of which is a small low window and the remains of a squint, which would have allowed lepers and others not allowed into the church to watch the service.

There are some interesting furnishings, and pride of place must go to the early 13th century effigy of a knight in armour, dating from the reign of Henry III. Although badly damaged (probably in the Reformation), what remains is of high quality. It is thought to be of Sir William de Covert: the de Coverts were local Lords of the Manor. His legs are crossed in the manner of a crusader, and a ‘de Covert’ is mentioned at the siege of Acre (1189-91). Could this be him? Next to the tomb is a 14th century Perpendicular font, and further along is a Saxon tombstone, depicting an elongated cross, now propped up against the north tower arch.

The other furnishings are mostly Victorian, but nicely done, and there is some attractive modern stained glass. It marries ancient and modern together perfectly.