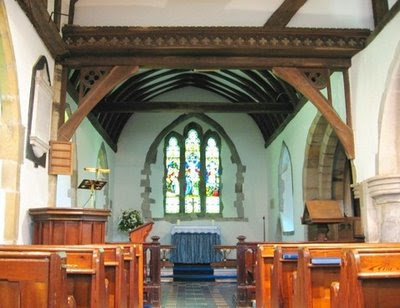 As well as being one of the prettiest churches in Sussex, St James’s church in Ashurst is also one of the most unusual and complex. It makes a fascinating challenge for students of architecture to ‘read’, and is a grade I listed building. I make no excuse for the fact that I have already referred to it before in my blog.


Situated in the Adur Valley, 3 miles north of Steyning, Ashurst is a small scattered village, set in a thickly wooded landscape. The church is on a small lane, half a mile beyond the village, and almost disappears into the woodland.

The first impression of the church is of its massive, squat tower, capped by a shingle spire, with thick-set buttresses. There is an attractive wooden porch with a red-tiled roof, and heavy Horsham slate covers what appears to be the nave. But from the north, a more complex (but still attractive) pattern appears: a jumble of roofs of different heights, with a lean-to and a tile-hung end wall.

Inside, things are no easier, but the dominant feature is a huge, single king-post roof covering both nave and south aisle, springing from the arcade. The nave is actually to the north; the lean-to is a small western extension, with a low roof with heavy beams. A Norman doorway with a simple rounded arch pierces the north wall.

The chancel is more conventional, and the same size as the nave. The south aisle is wider than both, and at the west end merges with the tower, and at the east end forms what must have been a small chapel, now the home of the organ. An arcade separates nave and chancel: the western arch is rounded, the other three arches pointed, the whole sitting on sturdy round columns with square bases. Some of the capitals have early stiff-leaf decoration.

You can be forgiven for being confused, but what seems to have happened is this: a nave was built in the early 12th century, and some time around 1180-1200 the larger south aisle was built, and possibly the tower and lean-to also, and the whole covered by the huge king-post roof. The Chancel itself seems to have been rebuilt in the 13th century, but there is no arch between nave and chancel, just a heavy beam, with quatrefoil decoration. The arch at the east end of the aisle is apparently Victorian. The west windows are both Early English lancets, and those in the chancel are 13th Decorated, with trefoil heads.

There are some furnishings of note: a lovely marble font of 13th century date, with a delicate arcade pattern on one side; a ‘vamping horn’ – an early kind of megaphone – hangs on one wall; dated 1770, it is actually a replica. This may have used by the choir during services to ‘beef up’ the tenor or bass line.

There are also a number of memorials, dating from the 17th century, including one outside on the east wall, to a former Rector. A more modern memorial records the gift of the Choir Vestry in memory of the actor Laurence Olivier: he lived in Ashurst, and his funeral service was conducted here in 1989.

The whole effect is a most attractive and intimate jumble, dominated by the arcade and roof. The church is still actively used for worship, and has a loyal congregation.