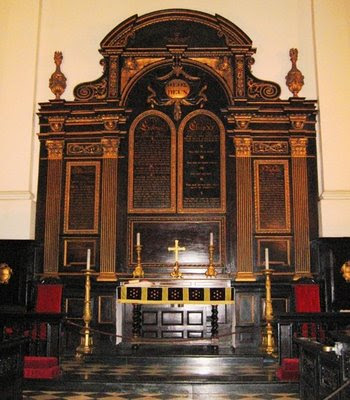 One of Wren’s most impressive churches, St Martin’s is often overlooked by tourists rushing along Ludgate to visit St Paul’s Cathedral. It is remarkable for its range of 17th century fittings.

There has been a church on the site since 1174, and it was rebuilt in 1437. However, the tower was struck by lightning in 1561, and worse was to come in the Great Fire in 1666, when the church was completely gutted.

However, work on rebuilding was well under way by 1680 and completed in 1703, and shows Wren’s amazing genius for making the most of a restricted site. The parish was amalgamated in 1890 with those of St Mary Magdalene Old Fish Street and St Gregory by St Paul’s, and acquired a number of furnishings from those churches. Further re-ordering in 1894 gave the present layout, and the church escaped relatively unscathed in World War II.

The church was the venue for the marriage in 1643 of one William Penn, father of the founder of Pennsylvania.

The façade on Ludgate is in a restrained Classical style, but impressive in scale. The tower is a prominent landmark, surmounted by a tall, lead-black spire. It is entered through a vestibule on the south side, which lies under a south gallery.

The interior is immediately a surprise, being much larger and loftier than one expects. The plan is a Greek cross within a square, with four Corinthian columns at each corner of the cross. The furnishings are outstanding: the chancel contains its original reredos, but the beautifully carved pews, pulpit and font are also original, all dating from around 1680.

Also of interest are a church bell, a 16th century memorial brass from the earlier church, a handsome late 18th century chest, and a 17th century bread shelf from St Mary Magdalene, where the wealthy would leave bread for poorer members of the congregation. The church has a number of paintings, one a copy of a Raphael from around 1720, the others Victorian, as is the glass.

The font under the organ gallery is inscribed in Greek: NIYON ANEMHMA MH MONAN OYIN, translated (apparently...) as 'cleanse my sin not only my face’. This palindrome (ie reading the same backwards and forwards) is found in several English and European churches.