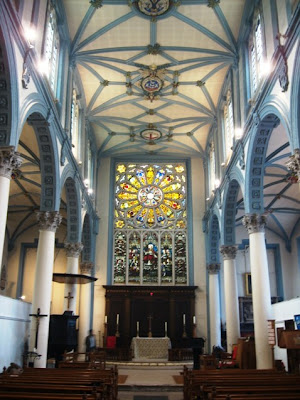 St Katherine Cree is, in many ways, an odd church: built at the end of the Jacobean period in 1628, after the partial collapse of the previous church, it narrowly escaped the Great Fire of London in 1666 - one of only eight City churches to survive. The word 'Cree' recalls the Priory of Christ Church which had stood on the site since 1108. St Katherine's was built for the parishioners, to avoid them disturbing the monks in the Priory itself.
The exterior is handsome enough, with Gothic windows and an ancient tower, with newer classical doorways, but gives no hint of the interior to follow. This is a shock: the layout is conventional, with a nave arcade and aisles, but the style is a jumble of classical and Gothic - a perfect illustration of the transition between the two at the beginning of the 17th century - and picked out in bright blue paint.

The arcade piers are Corinthian columns and support rounded arches in the classical style, but the nave and aisles ceilings are ribbed and vaulted with large painted bosses. The clerestory has classical pilasters and Gothic windows. The East window is more traditional: a large rose above perpendicular tracery, although it is set in a square frame. The glass is original and depicts the life of St Katherine.

The aisles have unfortunately been partitioned off, which rather spoils the interior space, but the church has some good furnishings: the font is a jolly Jacobean confection of classical elements, and on the south side of the east wall is the impressive tomb of Sir Nicholas Throckmorton (d. 1570), rescued from the earlier church.