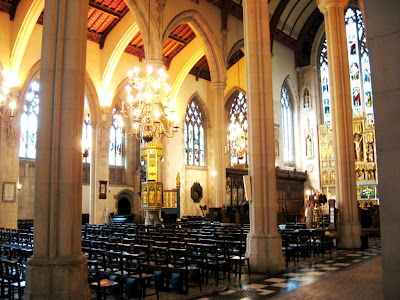 Holy Trinity, Prince Consort Road, is almost lost among the museums and institutions of South Kensington, its handsome façade easily overlooked alongside the Royal Albert Hall and the Royal College of Music nearby. But to lovers of Victorian church architecture, this is both the last and one of the finest examples by the 19th century church architect, G F Bodley.

The history of the church goes back to the mediaeval period, when it was founded as a chapel to a Leper Hospital on Knightsbridge Green. It had a chequered post-Reformation history: being rebuilt in 1629, again in 1699, and yet again in 1861. But even this was short lived: in 1901 the church was demolished and a new site provided on Prince Consort Road.

The architect chosen for the replacement church was G F Bodley. He delivered a classic Gothic Revival church in the best Perpendicular style, aligned north-south to cope with the very restricted site. It was begun in 1901 and completed in 1907, after his death. Built entirely of a lovely, golden Bath Stone, its exterior hints at what is follow: a bold symmetrical façade is dominated by a huge west* window of six lights, framed by two smaller three-light windows, and decorated with niches (though sadly, no statues).

Inside, one is immediately struck by the scale: a broad, lofty nave is supported by the most delicate of arcade piers, with a single, windowless south arcade and a double arcade to the ‘north’. The effect is a forest of slender columns, leading the eye along the windows of the north aisle, and to the splendid tall east window. It was intended to impress, and it does. The glass is mostly by Grylls, and includes the spectacular west window, designed as a war memorial and executed in a boldly colourful Renaissance style.

The furnishings are sumptuous and are easily a match for the architecture. Pride of place goes to the huge reredos, designed by Bodley as a triptych, lavishly carved and even more lavishly gilded and painted. This is set off by the altar, Lady Chapel triptych and the wine-glass pulpit, which are equally bold and decorated in the same gold and green colour scheme (although the pulpit wasn’t painted until 1964).

The other notable furnishings are the huge 17th-century style chandeliers, a handsome brass eagle lecturn and the memorial to Bodley himself, designed by Edwards Warren in 1910 and executed in the best Jacobean style. The church also owns a 17th century chalice given by Archbishop Laud, now on display in the V&A.

The interior is beautifully kept, and the church maintains the traditional cycle of services from the 1662 Book of Common Prayer. On my visit, I was warmly welcomed by a small group of church members, hard at work, polishing and burnishing their beautiful church.

Because the church is aligned north-south, the north becomes the ‘ritual east’, ie where the chancel is located. All references are to the ritual points of the compass.