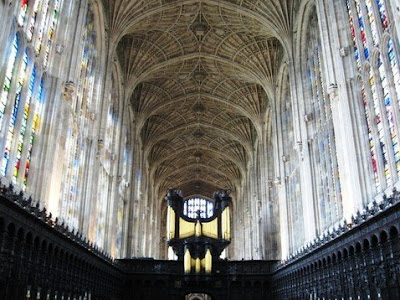 King's College is one of Cambridge's oldest colleges, and is best known for its Chapel - one of the outstanding mediaeval buildings of Europe.
The College was begun by Henry VI in 1441, created by levelling a fair part of the centre of the mediaeval town. The foundation stone for the Chapel was laid by the King in 1446, on the feast of St James, but it was to be over 100 years before the building was completed - spanning some of the most turbulent periods of English history. After Henry's murder in the Tower of London and the beginning of the Wars of the Roses, the completion was taken up by various Kings, particularly Richard III and Henry VII. It was completed in 1547.

The result is the stunning building we see to-day, perhaps the zenith of the English Perpendicular Gothic style. Most celebrated is the stunning fan vault, which runs the length of the building: this is the widest mediaeval fan fault in existence, but it is notable for its beauty as much as its scale.

The Chapel also contains fittings of superb quality, reflecting its generous Royal patronage. Thanks also to this patronage, they survived the predations of the later Puritan iconoclasts. The fittings include a complete 16th-century glazing scheme of 26 huge windows (perhaps the UK's most complete set of mediaeval stained glass); stunning 16th century woodwork and stone carving; and 'The Adoration of the Magi' by Rubens (1634).

Entering the building, one is immediately struck by its scale: a simple rectangular box in plan with side chapels along its length, it is 88 metres long, 12 metres wide and 24 metres to the centre of the vault. The walls are heavily buttressed externally, allowing the space to be taken up by huge windows with Perpendicular tracery. These are filled with 16th century glass (paid for by Henry VIII) of the highest quality (upper windows depict the Old Testament, lower panels the New Testament). Only the West Window is modern, from the 19th century. Also notable are the huge heraldic sculptures on the walls, reflecting the armorial devices of the House of Tudor (also a feature of Henry VII's Lady Chapel Westminster Abbey).

Turning East, the chapel is divided into ante-chapel and Choir by a dark wooden screen (1533-56), a gift of Henry VIII, which also carries the organ. You then pass through to the Choir, and the Lectern of Robert Hacomblen, who was provost 1509-28. The Lectern is surmounted by a statue of Henry VI. To either side are the choir stalls, with yet more superb heraldic carving. Ahead, the great East Window depicts the Passion of the Christ, and below it, above the High Altar, is Ruben's 'Adoration of the Magi'.

Some of the Chapels can be visited (one is always set aside for private prayer), but others are now offices, and several on the north have been converted into a small museum describing the building of the Chapel. Afterwards, take a walk around the green of the College, or walk down to the river, and turn back to look at the chapel. It is a stunning prospect.

Entry to the college and chapel is £5, and access times vary according to the College terms, and access beyond the Chapel is restricted during examination times. The Chapel's services are open to visitors, who can witness the building being used for its original purpose, to the strains of the College's celebrated choir...