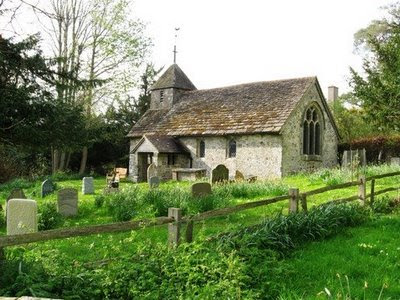 Sometimes on my travels around churches I come across a quintessential slice of England, and so it was at Wiggonholt - a tranquil hamlet, with trees, meadows and carpets of primroses.

This tiny hamlet lies just off the busy A283 between Storrington and Pulborough, north of the woods at Wiggonholt Common, and adjacent to the Pulborough Brooks Nature Reserve, in the care of the RSPB. Along the short lane leading to the church are former farms and the site of the old manor house.

The name Wiggonholt probably derives from the Saxon “Wicga’s holt” or wood, subsequently misspelled as Wikeholt (1212), Wygeholt (1230), Bykeholte (1296) and again as Wygeholt (1330). It is close to the route of a Roman road, and the remains of a Roman bath house has been found nearby. It has always been a rural place, however, and today has a population of just 30.

The church has a delightful wooded churchyard, entered through a charming lytch-gate. On my visit, it was carpeted with yellow primroses, and after an afternoon April shower everything smelt heavily of fresh, new, spring growth.

The church itself is a simple single cell structure dating from the late 12th or early 13th centuries with a porch and bell tower. Inside, its most prized possession is the late Norman font of polished Sussex marble, with a simple design of five rounded-headed arcades on each face. It is astonishingly well preserved. Most of the windows were replaced with ‘new’ Perpendicular designs in 1360-1485. The East Window is Victorian, and was made by Powell & Sons in 1859.

Other items of interest include its fine wooden roof, 17th century Jacobean alter rails and two mediaeval ‘Mass dials’ on the south west corner outside - sun-dials used to time Sunday services in the days before clocks.

There are services on the first and third Sundays of the month. There is no electricity here, and in winter it is lit by candles and oil lamps.