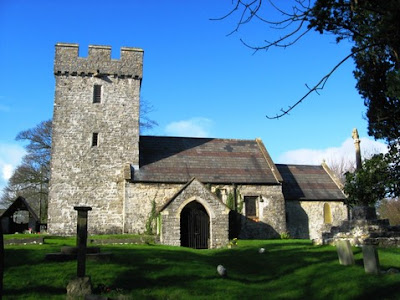 This delightful small church stands in the small hamlet of Porthkerry, (Porthceri in Welsh) just south of Cardiff International Airport and west of Porthkerry Park on the outskirts of Barry. In front of the church is a small green, surrounded by cottages and a farm, parts of which are itself mediaeval.

The church is dedicated to St Curig, a 6th Century Welsh saint who became Bishop of Llanbadarn (near Aberystwyth) and subsequently Bishop of Brittany, and died around AD 550. The settlement means the port or harbour of Ceri in Welsh, although which Ceri it refers to is rather obscure.

Built in the 13th century on a site which may be older, the church has a simple plan of nave, chancel and porch, with a robust west tower. The interior contains a water stoup and rood screen, both of Tudor sate, but pre-dating the Reformation. The interior is brilliantly whitewashed, a relic of substantial Victorian restoration in 1867, which saw the building re-roofed and the chancel arch rebuilt. The architecture is simple gothic, although much of the detailing we see to-day dates from the Victorian restoration. The remains of an ancient doorway can be seen in the south wall of the chancel. The church is listed at Grade II*.

The cross in the churchyard is also of interest as it dates from around the 15th century. Although rebuilt at a later date, it seems they used the original stone as it all appears to be mediaeval. The cross is a Grade II listed monument in its own right.

Despite its proximity to the airport and the growing village of Rhoose, the church and its little settlement feels relatively isolated and a little haven of peace - until disturbed from time to time by aircraft! The church can be reached by road from nearby Rhoose, or by footpaths from Porthkerry Park. (NB the paths are steep, and can be muddy in winter.)