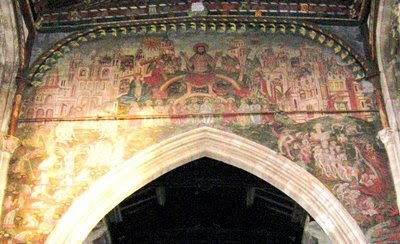 Most visitors to Salisbury never get further than the famous and spectacular Cathedral, which is, admittedly, the principal draw. But a few minutes’ walk away is the town church of St Thomas’s, which is well worth keeping half an hour free to see.

Located right in the centre of mediaeval Salisbury, the church was built to serve the workers building the new cathedral, and was dedicated to St Thomas a Becket in 1220. However, most of the building we see today results from the rebuilding in the mid 1400s in the Perpendicular Gothic style. The nave in particular benefits from a huge clerestory of perpendicular panels windows, flooding the church with light. The nave has a fine ‘Somerset’ roof, complete with dozens of carved angels.

The main event, however, is the spectacular ‘Doom’ wall-painting above the chancel arch, painted around 1475, depicting the Last Judgement. Hidden under whitewash during the Reformation, it was uncovered in the 19th century and vividly restored. It now ranks as the best preserved Doom Painting, to say nothing of being one of the most complete mediaeval wall paintings of any kind, in the UK.

The painting shows Christ sitting in judgement, with the Apostles at his feet, and the New Jerusalem behind. To the left, angels raise the good from their graves to heaven, while on the right devils herd the bad into the mouth of a wonderful blood-red monster. (The ‘bad’ includes several Bishops – I wonder what the contemporary Cathedral authorities made of this?) At the bottom sides of the painting, below the arch are images thought to be of St James (left) and St Osmund, the first Bishop of Salisbury, on the right.

Other items of interest include the Lady Chapel, built in 1470 by William Swayne, and containing a rich array of 15th and 16th century memorials, as well as some small fragments of wall painting depicting the Annunciation, Visitation and Nativity. The chancel also dates from around this period, but is rather plainer in style. The south wall has a fine carved wooden memorial in memory of Henry Beckham, who died, aged 83, in 1671. He apparently carved it himself – the panel below describes it as ‘His own Worke’.

The church is rich in other memorials, including diamond-shaped funeral hatchments and the Coat of Arms of Queen Elizabeth I. The tower is adorned by an attractive Tudor Quarter Clock which can be seen through an alley around the corner. There are daily services during the week and of course on Sundays, with an inclusive but traditional liturgy, which visitors are very welcome to join.