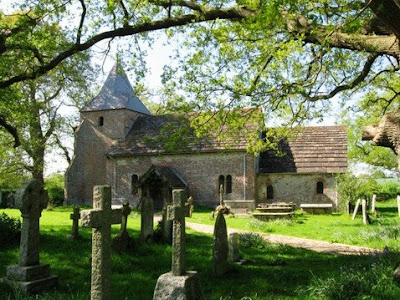 Twineham occupies an lovely spot in the Sussex Weald. Although just a few miles west of the A23 dual-carriageway from London to Brighton, this is typical rural England, with lush pasture, hedges thick with mature trees, scattered villages and winding lanes. It is believed that the name ‘Twineham’ is early English in origin, meaning ‘the homestead between the streams’.

The church sits at the end of a small lane off the minor road which forms of village of Twineham, in a pretty, wooded churchyard, next to the village primary school. On my visit, the churchyard was idyllic - full of bluebells and other spring flowers, and warmed by the early evening sun.

But St Peter’s Twineham’s is more than just your average village church. It unusually survived mediaeval rebuilding in stone, but when it was rebuilt in the 1516, early in Henry VIII’s reign, the new church was built in the very latest building material – brick.

It is thus one of the oldest brick churches in the country, as well as being one of the last parish churches to be completely rebuilt prior to the reformation. Part of its churchyard was also used by Quakers for their burials, between 1694 and 1732 – an unusual compromise, as dissenters often faced opposition and persecution.

The church is conventional in plan, with a west tower, nave, chancel and porch, and small, narrow window openings. The old brickwork and mortar of the walls has weathered into a beautiful patina over the years, and the roofs are covered with heavy brown ‘Horsham slate’ stone tiles. The tower has a spire with wooden shingles – a Sussex specialty. A sturdy half-timbered porch completes the picture, which contains the remains of some old wooden memorials.

Inside, the interior is clean and whitewashed. The walls are nearly two feet thick, and the windows have wide, splayed openings. A shallow Tudor pointed arch separates nave and chancel, but what catches the eye is the picture above the chancel arch of the Holy Family. Once thought to have been by the Italian master Camillo Procaccini, its provenance is now less clear. Below it, there is beautiful Elizabethan woodwork of the Squire’s Pew at the front, delicately moulded with classical arched and lozenge motifs, and an impressive Jacobean pulpit. The east window is said to be by Kempe, but is unsigned. The chancel roof may contain timbers from the original church, but this cannot be proven.

The hexagonal font is older than the present building, and may date back to the earliest recorded church in 1226. Marks show where there were once staples to lock the Holy Water in the font to stop it being used for superstitious purposes. Under the tower, the ringing gallery can be seen from the nave – the church has a peal of 5 bells. There is also a list of Parish priests and Vicars from 1287 until the present day.

The church is the centre of an active parish life – details on the parish website.