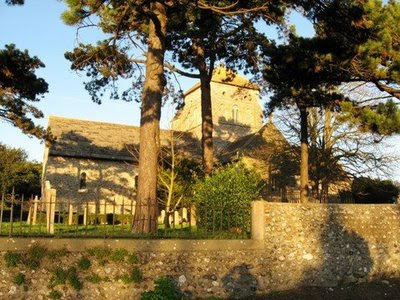 Now on the edge of modern Shoreham, St Nicholas is the church of 'Old Shoreham', as distinct for the 12th century port settlement of 'New Shoreham' a mile or so down the road. Just as Old Shoreham is now a quiet suburb on the old road to London, (albeit with some attractive pubs), St Nicholas is the smaller but older equivalent to the large and impressive church of St Mary de Haura (see separate Qype review).

St Nicholas is recorded in the Domesday Book, and a Saxon church is thought to have existed here since 800AD. The present nave certainly dates from the Saxon period, possibly around 850AD. The church was enlarged in the early Norman period, between 1070 and 1100, and in 1130-50 the fine Norman tower was erected.

It is this which gives it the main reason for a visit, in the form of a fine set of romanesque arches beneath the tower crossing. The chancel was rebuilt in the gothic period, around the 14th century and the church was restored and a vestry added in the Victorian period. It is grade-I listed.

From the outside, the church sits in an attractive churchyard, complete with Sussex flint walls. The tower dominates, with two window openings on each side, framed with attractive romanesque blind arcading. Inside, the tower crossing is a classic of Norman architecture: heavy, rounded arches are sumptuously decorated with zig-zag and dog-tooth carving, lozenges, arrow-heads, limpet-shells and roses, as well as several human heads (two of which are said to the those of King Stephen and his Queen, Adelicia of Louvaine), a strange cat, and an elf-like creature. From whatever angle you choose, the arches make a beautiful composition.

There are more Norman arches, in the east wall of the north transept and above a now-closed doorway through the original Saxon nave wall. The chancel is noted for its fine roof, painted in the Victorian period, and for a poignant memorial plaque to Christopher Head, who died aged 42 in the wreck of the 'Titanic'.

After your visit, why not try some more earthly refreshment in the historic Red Lion pub, a CAMRA-listed venue serving food and fine real ales?