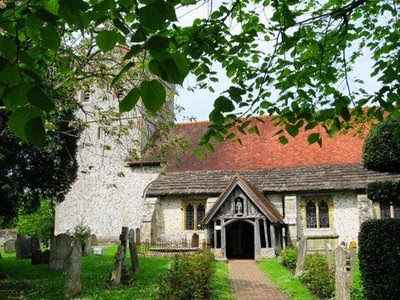 Ringmer is a lovely, thriving village in East Sussex a few miles north of Lewes, (and just a mile from the opera house at Glyndebourne), with a large traditional village green right at its centre. The ancient church is a lovely building of flint and stone walls, set in a churchyard so thick with trees that in summer it is effectively hidden from view.

Although there has probably been a church of some sort here since Saxon times, the present building dates from the early 13th century. The hexagonal nave pillars with their pointed arches are classic Early English Gothic in style, and may well date from the 1230s - a list of vicars begins in 1233.

The church was considerably enlarged in the early 1500s, with the addition of a north Lady Chapel and a south Chapel, now referred to as the Springett Chapel because of the memorials there. Both are in the Perpendicular Gothic style. The lovely wooden porch is a little earlier, built sometime in the 1400s.

The church was also significantly restored in the Victorian period, when the present fine bell tower was erected in 1884, and the lych gate in 1918. Worth noting is the roof, the lower portion of which is covered with Horsham stone slabs, with the rest roofed in local red clay tiles. Why this was done is not known: it may be that the tiles were cheaper, or lightened the load on the roof structure. Inside, the font is also Victorian. A large hall was added a few years ago on the north side, which happily fits in well with the jumble of other additions.

The main points of interest in the church are its memorials. These start - most notably - in the south ‘Springett’ chapel. In the south east corner is a splendid memorial to Harbet Springett (d 1620), a successful Lewes lawyer. In the south west corner is a memorial to his grandson, Sir William Springett. A Colonel in Cromwell’s army in the Civil War, he died of typhus during the siege of Arundel (1643) at the age of 22. Being both a knight and Colonel at such a young age was an achievement - even in those days - and was probably connected to the fact that he was a fanatically ardent Puritan and renowned iconoclast. His daughter Gulielma married William Penn, the founder of Pennsylvania. Next to the memorial is a bassoon, a remnant of the orchestra used before the organ was installed.

In the Lady Chapel are two memorials of note: another early 17th century memorial commemorates Elizabeth Jefferay, daughter of one Walter Mayney (complete with bad puns). Opposite - and with another connection to the USA - is the rather humbler memorial plaque of John Sadler, who died in 1640, and whose daughter Anne married John Harvard, founder of the American University.

Further along the north wall is an unusual monument to Peter Meshullam (d. 1862), ‘cruelly murdered …on the plains of Bethlehem’. A deputy consul at Jerusalem, it is possible that he used his position unwisely, and antagonised the local population.

Finally, the organ, at the west end of the church, is of note, not for its age - it was installed in 1922 - but because air was originally pumped by means of a rather noisy motorcycle engine, which had to be housed in the small building next to the tower as it was so noisy!