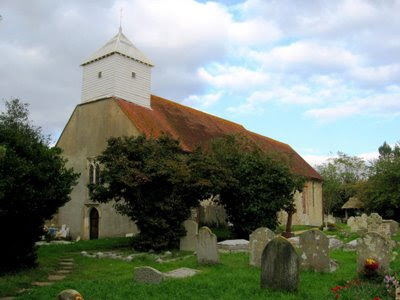 Away from the sprawl of modern village of Barnham, St Mary's church sits in a quiet wooded spot next to the old Manor House (Barnham Place) and the remains of the old Chichester Canal.

The church is mentioned in 1086 in the Domesday Book, although the oldest part of the present church dates from around 1100. A remodelling in the early 13th century saw it enlarged with a new chancel, porch and a north aisle, although this was susequently demolished. (The Victorians opened one of the aisle arches to insert the organ).

The exterior is rather homespun, the main feature being an attractive wooden bell-tower, painted white traditionally as a landmark to aid shipping. It contains one of Sussex's oldest bells, dated 1348. Inside, the walls are painted an odd hue of pink but, apart from the sequence of windows, from Norman through Early English lancets to early examples of Decorated Gothic, the main interest is in the details: there is a much-battered Norman font, crusader crosses and unusual 'Agincourt' graffiti carved into the stonework, and a 15th century statue of St Elizabeth of Hungary.

The Agincourt graffiti is exceedingly rare. Above and beneath a cross on the north aisle arch, are inscribed crudely the words (in Latin) 'Pray for the Soul of my father who died at Agincourt'. The rarity comes from the fact that so few could write at this time (1415), and yet its author could not afford a proper memorial. Below it are more crusader crosses, which must date from the time of rebuilding (the last crusade ended in 1291).

Outside, the church has an attractively wooded graveyard, and a Lych Gate with a heavy Horsham stone roof.