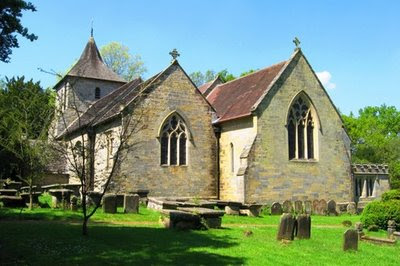 The bustling village of Balcombe is situated half way between Haywards Heath and Crawley, in the heavily wooded hills that define this northern part of West Sussex. Its church is usually open for visitors, and is well worth a look.

There has been a church here since 1090, although the earliest part of the present building dates back to the late 13th or early 14th century, and consisted of a small nave and chancel. In the 15th century a fine square tower was erected, topped by a wooden shingled spire, in the Sussex style. A painting dated 1805 shows the small church with a large, two-storey porch.

However, during the 19th century the village grew significantly in size, aided by the coming of the London to Brighton railway, which passes just to the west of the village. This led to two thoroughly Victorian rebuildings: one in 1847 which added a new nave to the north of the existing one, and another in 1872 in which a new chancel and north aisle were erected beyond. The extensions more than trebled the size of the church, relegating the former nave and chancel to the South Aisle and Lady Chapel.

Unfortunately, as was often the case, the Victorians did away with the mediaeval porch, font and pulpit at the same time, resulting in great damage to the historic integrity of the church. However, the 15th century tower has survived intact, and its peal of eight bells includes three dating back to 1614. The church interior is still quite attractive, and features some unusual gated pews, as well as modern embroidery and a handsome brass eagle lectern.

The stained glass is all Victorian, the most impressive of which is the great west window, which commemorates George Meek, the High Sheriff of Sussex, and his wife, Fanny Amilia. He caught a fever at the Lewes Assizes and died in May 1874 and, sadly, Fanny died of the same fever a week later. Another point of interest is the four heads (two Kings and Queens) beneath the chancel arch. It is not clear if these are Victorian or were rescued from the mediaeval fabric.

The churchyard contains more of interest: it contains 28 chest tombs, dating from the 17th century onwards, as well as a number of ‘headboard’ memorials, stone versions of the Sussex tradition of erecting headstones in the shape of (or sometimes taken from) the headboards of the deceased person’s bed. On my visit, there were drifts of bluebells in the far corners of the graveyard – also a feature of the woods around the area.

On the way out can be seen the new lych gate. As part of the Millennium celebrations, English Heritage sponsored a competition to donate a new lych-gate to the most deserving church. Balcombe won the competition and, using oak donated by the adjacent Balcombe Estate, the present gate was completed in 2002. It makes for an imposing entrance.