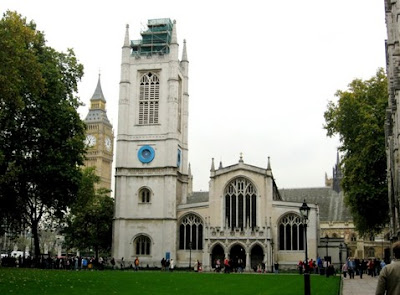 St Margaret's church lies in the shadow - both literally and figuratively - of Westminster Abbey next door. Only a fraction of the visitors to the Abbey ever stop to look into St Margaret's, which is a pity, since it is an interesting and historic church in its own right. (And unlike the Abbey, entry to visitors is free).

The original church was built in the 11th century for the local Parish, so that the monks in the adjacent Abbey could hear Mass undisturbed. This building was partly rebuilt in the 14th century, but by the 15th century it was in very poor condition. An entirely new church was therefore begun on the same site in 1482, and completed in 1523.

The result is an astonishingly uniform church, built in the Perpendicular Gothic style throughout, although the white stone on the outside and the whitewash inside does render it somewhat dull. However, it contains many interesting tombs and memorials from the 1520s onwards, especially since this became the church of Parliament in 1614. The most notable memorial is that to Sir Walter Raleigh, who is buried in front of the altar, and windows commemorate Caxton and Milton.

The most spectacular feature, however, is the East Window: part of wedding dowry of Catherine of Aragon, this was probably designed in Holland around 1526. Henry VIII and Catherine kneel in opposite corners, under a detailed depiction of the Crucifixion. The colours are astonishing - indeed, many mistake it for a modern piece - with large expanses of vivid blues and reds.

Finally, the tower is interesting for its sundials, in place of clocks