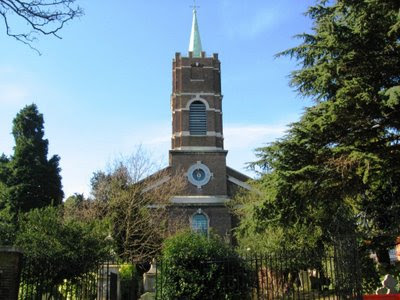 Hampstead still retains the feel of the village, despite being absorbed by the sprawl of modern, urban London: a settlement since mediaeval times, the pattern of narrow streets and Georgian houses gives it a distinctive and almost rural feel – more provincial town than the wealthy and trendy suburb it now is.

Nowhere is this more apparent than the attractive terrace of houses in Church Row that leads to its Parish church, itself surrounded by mature trees and ancient tombs. There has been a church here since the 14th century, although there may have been one here before then, when it was part of the lands of the Benedictine foundation of Westminster – having been granted to them as early as 986AD.

As Hampstead grew, the early church – part wood, part stone – was in a parlous condition, and too small for the expanding congregation, and in 1744 a new church was planned on a larger scale. This was consecrated in 1747, with its tower completed over a decade later. Hampstead’s continuous growth led to further building, in 1844 and 1878, which resulted in the church being expanded to the east, and turned around, so that the present chancel is at the west end, with the entrance being at the east, under the tower.

The result is a classic Georgian church, with generous galleries on both sides, the nave being part of the original church of 1747, with the chancel dating from the 1878 rebuilding. The nave is classical, with Ionic columns, but the chancel is more Baroque, but it all blends harmoniously together. The church retains substantial pews – box-like in style, but without gates – and painted in the same scheme as the rest of the church. The nave and gallery windows are competent examples of the workshops of Clayton and Bell, with enough clear glass to ensure the interior is flooded with light. The font, at the entrance to the nave, incorporates the bowl from the 1745 original.

In the north transept is a grave-stone from the earlier church, dated 1658, of one John Rixton: he left a bequest to provide bread for the poor, and contains the classic epithet: ‘As thou art, so was I; as I am, so shalt thou be’.

The wooded churchyard is a lovely spot for quiet contemplation, thoughtfully provided with benches. In the south west corner is the grave of the artist John Constable (1776-1837) and his wife, who settled here and lived for many years in the parish. His paintings of Hampstead Heath recall a quieter and more tranquil period.