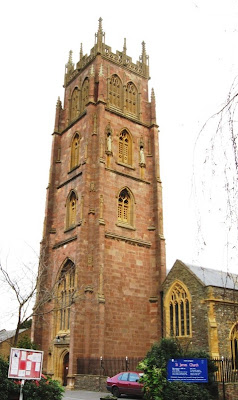 St James is the younger brother of Taunton's other mediaeval church, of St Mary Magdalene. St Mary's is older, larger, and has a bigger tower. Nevertheless, the two conspire in harmony to define the view of Taunton, for those entering from the east and north. Although most visitors are (rightly) drawn to St Mary’s, St James is worth a look for its tower, fan vault and some interesting furnishings.

Taunton is a Saxon town, founded by King Ine in 705 to defend his western boundary from the Celts of Devon and Cornwall, and it was in the nearby marshes of Athelney that King Alfred hid from the Danes, and famously burnt the cakes.

Although there may well have been a church here in the Saxon period, St James is known to have existed since 1169, and this church was roughly the size of the present nave. Around 1308, the original building was pulled down and the present nave and north aisle erected. Not much changed until the 19th century, but the Victorians were very active here: in 1832 a south aisle was added, and the upper parts of the splendid tower was rebuilt in 1867 to replace the original, to a slightly different design, which was in danger of collapse. Finally, the chancel was enlarged in 1888, and the south aisle extended into a chapel, and an 18th century gallery removed from the north aisle.

From the outside, the tower dominates everything. Although largely Victorian, its design - executed in a fine, red sandstone - is firmly in the tradition of fine Somerset towers, and a good example of the 'Taunton' group which have horizontal emphasis, rather than the vertical emphasis of the 'Wells' group. The red sandstone is enlivened by fine stone dressings in the famous golden Ham limestone.

After this fine beginning, the interior of the church comes as something of a shock: although clearly old, it has been modernised with the removal of its pews to allow a contemporary style of worship, with an unfortunate choice of a pale green carpet and modern seating.

Look hard, however, and the older architecture becomes clear: the north arcade of the nave, and the north wall, date from the 14th century rebuilding, and the original fan vaulting in the vault beneath the tower - now the entrance porch - has survived the Victorian rebuilding, and dates from around 1440. At the east end of the north aisle, a mediaeval squint has survived – a feature constructed to enable those in the aisle to watch the elevation of the host during the mediaeval Mass.

There are some interesting furnishings: pride of place goes to the lovely 15th Century font, each of its eight sides decorated with figures of saints; and the pulpit is a fine example of local carving, and dates from 1633. Next to the font is the memorial to Colonel Lacy Walters Giles Yea, (d. 1845) killed in the Crimean War, complete with two statuettes of Fusiliers. The south aisle chapel boasts a fine wooden screen - exhibited in the Wembley exhibition of 1825 and made of Burmese Coco wood. It provides a perfect place for quiet contemplation.

The church to-day has a vibrant parish life, with worship in a contemporary style (complete with band). Although not to my taste, there's no denying its popularity, and the church undertakes considerable charitable and missionary work in the area.