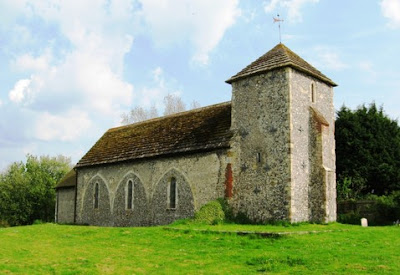 Sussex is well endowed with Saxon churches, and St Botolphs is one of the finest.

Situated in the hamlet to which it gave its name, the church also serves the adjacent hamlet of Annington. Together, their population is today less than 50, but this large church gives away the fact that in earlier times this was a thriving port on the nearby River Adur.

The church dates from 950 AD, and the nave is typical of the Saxon style: narrow, tall and long. Around 1250, a north aisle was erected, and three generous and elegant Early English Gothic arcades were inserted in the north wall. At the same time, the chancel was rebuilt, possibly replacing a Saxon apse, and the west tower added. However, as the river silted up and changed its course, the little town declined, and around 1450 the north aisle was demolished and the north wall closed up, although the three arcade arches are still clearly visible, both inside and out.

Thereafter, little has altered: the south wall is the Saxon original, and includes a small Saxon window alongside newer (mostly mediaeval) insertions. The chancel arch includes a Saxon roll on its interior, unusual in that it does not follow the arch to the floor, but rests on two corbels, which have early Saxon decoration, made using a trowel. The chancel has some fine very early Gothic lancet windows, including two ‘squints’, to allow people outside the church (such as those excommunicated or with a disease) to watch the service within. The one on the north side is probably a ‘Leper’s Squint’; we know there was a leper’s hospital in nearby Bramber in mediaeval times. The one on the south wall has a scratch sun-dial outside, possibly to denote the times of confession.

There are also faint wall paintings above the chancel arch, the oldest of which may date from the Saxon period. Three bells dating from 1536 still ring out from the tower, hanging in their original wooden frame. There is a fine Jacobean pulpit, and a royal coat of arms from the time of Charles II. The heavy wooden door bears the date 1630 and the initials of the churchwardens.

The church is well worth a visit - why not combine it with a walk along the adjacent Downs Link long distance footpath?