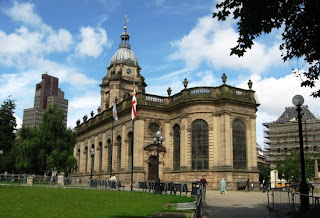 St Philip's has a superb setting in central Birmingham, located in the centre of a lovely square with graveyards and lawns. It's an oasis from the surrounding hustle and bustle of shoppers, office workers and customers of the area's many bars and restaurants.

One thing that strikes you straight away is its size: it's perfectly formed, but rather small. This is because it was built (1709-1715) to be the rather imposing parish church of a then-expanding industrial and market town, rather than the Cathedral of the UK's second city. It was elevated to Cathedral status in 1905.

The building itself is in the English Baroque style, with a dignified but relatively plain exterior, without an apse or transepts. The nave has elegant piers of square Corinthian columns, with substantial galleries. These lead to a rather more sumptuous sanctuary, with more elaborate Corinthian columns with gilded capitals, and some superb stained glass by Burne-Jones. But the overall effect is rather intimate, reflecting its overall scale.

The graveyard and lawns around are a real lung for the city centre, and are lunchtimes are full of office-workers seeking some fresh air and sun. There's one notable gravestone near the west end of the church, recording Nannetta Stocker (1782-1819). She was a small person, who left the village of Kammer in her native Austria, to tour Europe. As well as being only 84cm high, she was a talented pianist and played as part of a duo with John Hauptman, who was a violinist and 8cm taller. The inscription is charming, and reads:

"In Memory of Nannetta Stocker, who departed this Life 4th May 1819, aged ** years, The smallest Woman ever in this Kingdom possessed with every accomplishment, only 33 inches high, a Native of Austria."