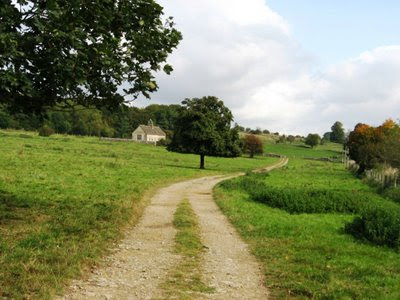 Widford is worth visiting for its setting alone. Built in the 12th and 13th centuries for a settlement which has long since disappeared, it sits on a rise above the river Windrush in a sublime rural location. There is no road to the church, just a track alongside the river. It is tranquillity itself.
The church was built by (or for) the monks of St Oswald’s priory in Gloucester, on the floor of a Roman villa. The parish belonged to the priory between 1086 until the dissolution in 1545, and parts of the building may date back this far. The floor of the chancel covers the remains of a Roman tessellated pavement, sadly now hidden again to preserve it. But the church contains a simple 13th century tub-shaped font, a 15th century pulpit and charming late 18th/early 19th century box pews.

The most notable feature, however, is the wall paintings, thought to date from the mid-14th century. The one in the nave features a badly defaced St Christopher, with his staff the most clearly visible feature. In the chancel is a rather better preserved cautionary tale of the Kings and the spectres: the church guide explains the saying: ‘As you are, so were we: and as we are, so will you be’. The chancel also has undecipherable fragments of other images.

The church has regular, if infrequent, services. Alternatively, there are lovely walks along the valley if you just want to pay a casual visit.
Widford, Oxfordshire, OX18 4DX
Posted by David J at 13:01