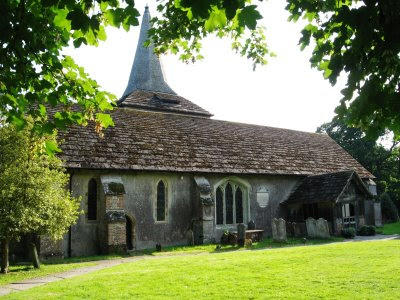 St George's is one of those rural churches which has lost its village. It is approached by small lane off the B2135, which twists and narrows past farms and the rectory, until just two strips of tarmac remain, with grass growing between, hedges encroaching on both sides.
Behind the church, the River Adur flows sluggishly towards Shoreham and the sea, but was until this century navigable for small trading craft, and doubtless gave the mediaeval village an outlet for transport and trade.

The church is pure Sussex: a low tower with a lovely wooden shingle roof, a rustic but generous 16th-century porch, and herringbone stonework on the north walls (but not so nice rendering on the others). The nave roof was originally thatched, but now has a heavy stone roof, possibly from the 15th century. The churchyard is suitably wild and overgrown.

The interior is rather a muddle of styles, but essentially is an Early Gothic building from around 1200. There are elements of an earlier Norman building dating from around 1100 visible in the north wall, including a small Norman window above the porch.

It has a very generous south aisle, almost overshadowing the rather intimate nave, with simple Gothic arches between. But the fittings are special: the pews are identified with the names of individual farms, the location of which is shown on an adjacent map. There was room for one person per farm, and the wives and servants sat further back. The names date from the early 19th century, and are wonderfully evocative of a bygone age.

There are also some splendid funeral monuments, including one to William Powlett by the celebrated Flemish sculptor John Michael Rysbrack, dating from 1746. Powlett and his wife stare longingly at each other across a Roman Urn, but the monument to-day is rather forgotten, hidden behind a jumble of old pews and modern plastic chairs. How the great are humbled...