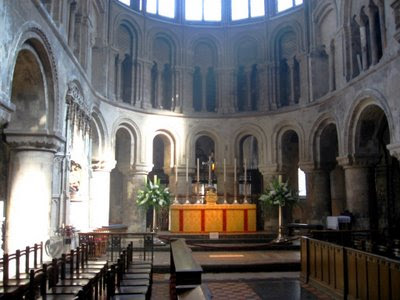 Hidden away across the road from the famous hospital that bears its name, St Bartholomew the Great is a fascinating and atmospheric church, a little enclave of mediaeval London. One of the few surviving monastic churches which once filled London, it contains the City’s finest example of Norman Romanesque church architecture.
The Priory and the adjacent hospital were founded in 1123 by Rahere, a courtier to Henry I, in thanksgiving for surviving a fever contracted on a pilgrimage to Rome. Rahere went on to become its first Prior, and died in 1143. Much of the Priory complex was destroyed at the Dissolution, including the nave, transepts and much of the cloister, but the Norman Chancel and crossing arches survived to become the parish church. The building has been much altered and pulled about since then: the 13th-Century Lady Chapel was in secular use until the 19th century. (At one point it was a printing works, with one Benjamin Franklin as an employee). Much of the church, together with part of the cloister, was restored in the 19th and early 20th centuries.

Approached through an attractive Tudor gateway – itself a rare survivor of both the Great Fire of 1666 and World War II – the church has a rather jumbled external appearance. Attractive flint and stone walls, decorated with a chequerboard pattern, contrast with the 17th Century red-brick tower. The attractive raised garden to the left is the churchyard, on the site of the original nave. And on the right, overlooked by modern offices, is the former cloister.

Once inside, the dark and gloomy interior makes an immediate impression – heightened on my last visit by a fog of incense left from a Sunday service, with shafts of light falling from the clerestory. The eye is drawn towards the High Altar, enclosed by the stunning groin-vaulted ambulatory and lit from above by 14th century decorated gothic windows. To the left is Rahere’s tomb, erected in the early 14th century, his effigy vividly painted. Turn around and you see more of the Norman church, including two huge crossing arches, though devoid of their original transepts.

Besides Rahere’s tomb, the church is full of delightful 16th and 17th century monuments, and what is claimed to be the oldest font in London. A rather newer addition is the sculpture ‘Exquisite Pain’ by Damien Hirst, depicting the martyrdom of St Bartholomew (supposedly flayed alive).

Access to the church is free for services and for Private Prayer, but since early in 2007 visitors have been asked to pay a £4 entrance fee.