Church of the Transfiguration, Pyecombe 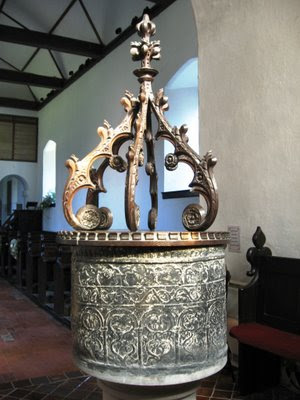 Pyecombe is a lovely little village, famed for its unique design of shepherd’s crooks, and boasting a delightful Norman church, with an unusual dedication. In the 17th century, the plague forced a temporary abandonment of the original village around the church, which led to the modern village being effectively in two distinct parts. Alas, the motorway-like A23 has intruded rather more permanently on the village, although in the churchyard it is still possible to imagine yourself in more tranquil surroundings.
The church itself was built in 1170. Its exterior is attractively rendered and inlaid with Sussex flints. The low tower, with its pyramidal cap was added in the 13th century, and the porch - roofed with massive Horsham stone slabs - in the 14th century.

The interior has a simple plan, without transepts, plain whitewashed walls and the most basic of Norman chancel arches. But it is beautifully maintained and boasts some interesting fittings: a Jacobean pulpit, dated 1636; very rare decorated 13th-century encaustic tiles in the sanctuary; and, best of all, a Norman lead font, also dating from 1170, decorated with an arcade of perfect Romanesque arches and swirling patterns. Although not as fine as that in Brooklands, it is one of only three in Sussex and considered the finest of those. Legend has it that during the Civil War, the villagers whitewashed the font to conceal the fact it was made from lead, lest it be melted down to make bullets.

The churchyard has a rare Tapsel gate, pivoted centrally. These gates are found only in Sussex. Pyecombe’s is also surmounted by a shepherd’s crook, of a type made in the one-time forge opposite. Apparently, tapsel is so local a word it doesn’t even feature in the Oxford English Dictionary.
Church Hill, Pyecombe, West Sussex
Posted by David J at 12:59