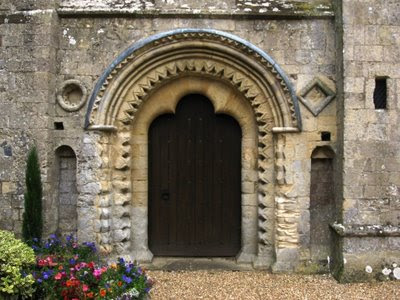 Climping can't seem to make its mind up as to whether it should be Climping or Clymping - both spellings are used in the village. Either way, it has a noteworthy church to visit. Nestling behind a bank of trees next to the sprawl of Ford Open Prison, it would be easy to miss. But that would be a pity, because the church is almost untouched since the mid 13th Century, and contains a superb and unique Romanesque doorway, as well as a perfect Early English interior.
Approaching the church, the exterior on the south side is dominated by the squat Norman tower over the south transept. This was built around 1180, and may well have been part of an earlier structure. The most striking feature is its door, an amazingly complex piece of architecture for such a small village. The door has three contrasting orders of design superimposed on each other, with an inner trefoil arch and outer layers of lozenge and dogtooth decoration, and a roundel and lozenge feature on the spandrels.

Above the door, the tower has a narrow window on each side, with more complex zig-zag decoration. Elsewhere on the tower are two examples of the 'Crusader Cross', carved into the stone by knights on their way to the crusades, and the remains of an ancient sun-dial. In all, the tower is a remarkable piece of early mediaeval architecture.

The remainder of the church nave, south aisle, north transept and chancel was built later, around 1220-30. In marked contrast to the tower, the interior reflects a restrained and sophisticated application of the Early English Gothic style, with single-lancet windows throughout. The grouping of three lancets in the east wall of the chancel, set under a delicate arcade, is stunning in its simplicity and beauty, and was much admired by the architectural historian Pevsner. Also of note are the 14th-century stone pulpit and 15th-century font.