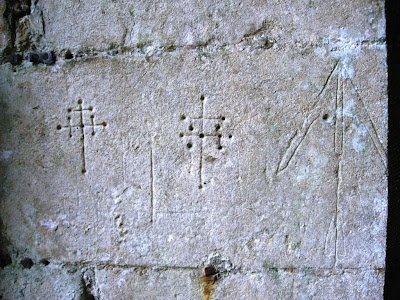 Westbury-on-Severn is a small village known primarily for its famed Dutch Water Gardens, now in the care of the National Trust. But adjacent to the gardens is the distinctive spire and grounds of the lovely church of St Mary, St Peter & St Paul.
Although there has been a church here since about 1100, the porch and north aisle of the present structure date back to 1290. The rest of the church is basically 14th century, although much restored by the Victorians between 1862 and 1878. The nave is high and spacious, with seven bays of alternating round and quatrefoil piers, but apart from two surviving windows in the decorated style, either side of the chancel, the main interest comes from its fittings and the separate bell tower.

The pews date from the 16th century, with linen-fold carvings at the ends, and there is a fine window by Kempe depicting Saints Elizabeth, Mary and Anne. Further along is an interesting font, with a supposedly Norman bowl set on a plinth carved with the Arms of Elizabeth I, and dated 1583. Best of all are the rose-bowl piscina below the south chancel window and delicate 13th-century crusader crosses carved into the main porch arch, in excellent condition.

The separate bell-tower is the equal of the church: built in 1290, it is a robust structure, used as a defensive tower against raids by the Welsh. In the 14th century, its fine wooden spire was added: standing at over 150ft (49m) and covered with over 35,000 wooden shingles, it has a silvery glow which can be seen for miles around. When it was damaged by storms in the 17th century, it was repaired using the wood from cider casks!