The Assumption of Blessed Mary and St Nicolas, Etchingham 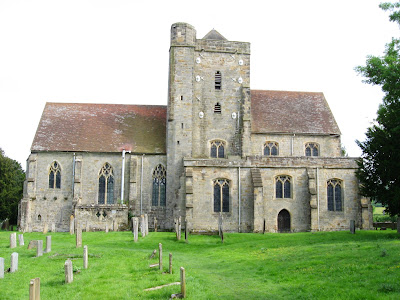 Etchingham is a small village (pop. 700) with a big church. Situated at the side of the busy A265, it is probably barely noticed by motorists rushing past, or even by those glimpsing it from the Hastings-London railway line.
The church itself is a Cistercian monastic foundation, dating from around 1385. It has survived remarkably intact, and now functions as the parish church. Unfortunately, the Manor House, in whose grounds it was located, did not fare so well - the railway station now stands on the site, although vestiges of the moat can be seen.

Looking from the outside, the church has a robust bulk, with a heavy central tower. The windows are clearly of the decorated gothic style, and the brass weather vane claims to be England's oldest, still in its original position. It depicts the de Etchyngham family coat of arms.

Inside, the height of both nave and chancel impresses, but it's greatest treasure can be found in the chancel: the intricately carved misericords (ledges under the choir seats for monks to rest during long services) are among the best and most complete from the period. Themes include a fox preaching to geese, pairs of keys and leaping dolphins.

The church also has some fragments of mediaeval glass, original (and very rare) mediaeval floor-tiles, and some interesting funerary brasses: these include Sir William de Etchyngham himself, resplendent in full armour (d. 1389), and a large and unusual triple brass to his son, daughter-in-law and grandson. Another interesting memorial commemorates Henry Corbould, designer of the world's first postage stamp, the Penny Black, who was buried here in 1844.

The whole interior has been restored after the nearby River Rother caused terrible flood damage in 2000, with a metre of water pushed into the church. Thankfully, it has all survived intact. The church is well known for its music festival, which attracts choirs of international renown.