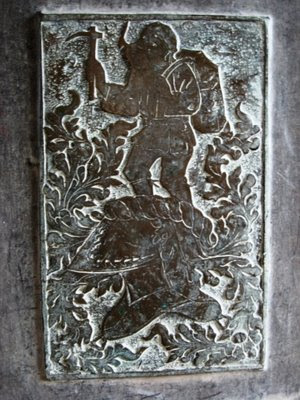 Newland is a tiny village on the western edge of the Forest of Dean, its valley winding gently down to the River Wye. The village is both in a Conservation Area, with notable Almshouses and other domestic buildings, and situated in the Wye Valley Area of Outstanding Natural Beauty. It is a lovely place to visit.
The village might be tiny, but the church is not: known as the 'Cathedral of the Forest', by virtue both of its impressive size, and its foundation as a mission church (at a point when the authorities had not really penetrated the Forest of Dean itself), it dominates the little settlement.

Established around 1200, All Saints predated its settlement. King John appointed Robert of Wakering as its Rector in 1216, and this link with the establishment was maintained: subsequent building in the 14th and 15th centuries greatly enlarged the church, including a chantry chapel donated by Edward I in 1305. Unfortunately, the church had decayed substantially by the 19th century, and a major restoration in the 1860's saw the roof rebuilt at a higher level, and the chancel arch enlarged. What we see to-day, therefore, is a Victorian re-working of a mediaeval church.

Apart from its obvious grandeur, its chief interest lies in its collection of tombs: these include those of the Forester, Jenkyn (John) Wyrall, dated 1457; the 14th century tomb of Sir John and Lady Joce of Clearwell Castle, with Sir John resplendent in his armour; a wonderful incised figure of a 17th century bowman; and several priors and clerics and a headless effigy of a woman.

The most famous memorial, however, is a funerary brass of a knight and his lady, surmounted by the heraldic brass of the Baynham family, commonly known as the 'Miner's Brass'. This shows a coat of arms with a miner, with his hod over his shoulder and his pick in hand, grasping a candle-holder, complete with candle, in his mouth. This delightful character demonstrates the importance of mining to the mediaeval economy of the Forest.

Beyond that, the church has a fine Perpendicular window in the north aisle Lady Chapel, and Victorian stained glass of good quality, alongside interesting modern embroidery.

However, it is clear that the village of Newland, with a population of only 130, is unable to sustain its church at the present time. On my last visit, there was talk of closure, and it is evident that the interior is nothing like as carefully tended as in the brochure written in 1998. An appeal has begun to save it as a place of worship, and restore it for future visitors. One must wish them every success.