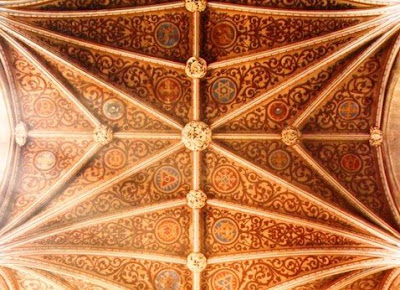 Although the Cathedral at Hereford sits on an ancient Christian site, it has been rebuilt many times during its 1,300-odd year history, most recently in the early 20th century. But this small, attractive Cathedral has had a more colourful history than most, and contains some priceless historical artifacts, notably its mediaeval chained library and the famous Mappi Mundi.

Hereford is thought to have been the centre of a diocese as early as the 6th century, but it is clear that it was refounded in 676AD by the Saxon Bishop Putta, erstwhile Bishop of Rochester. In 792, the cathedral also became home to the remains of King Ethelbert (Æthelberht) of East Anglia, beheaded by Offa, King of Mercia. The reasons behind the beheading are unknown – the unfortunate Ethelbert was to have married Offa’s daughter. Whatever the cause, miracles were said to have occurred at his tomb, and Ethelbert was canonised: the cathedral still retains its double dedication, to St Mary the Virgin and St Ethelbert the King.

Around 830AD, the church was rebuilt in stone, and stood until ransacked by the Welsh in 1056. The arrival of the Normans signalled a major rebuilding programme, begun under Robert of Lorraine in 1076 and completed in 1145. Much of this work remains, particularly in the Choir and the Transepts, and the finely decorated nave arcade. The retention of the 11th-century ground plan is the reason for Hereford’s relatively small size.

A retro-choir and Lady Chapel were added around 1220, and the same century also saw the rebuilding of the north transept, and the clerestory and vault of the Choir. The 14th century saw the essential completion of the church, with the additional of its fine decorated gothic central tower, a western tower, a number of chantries, a fine cloister and the north porch.

In 1786 the western tower collapsed, taking the West front and part of the nave with it. Rebuilt – not entirely successfully - by James Wyatt, the 1800s saw further restoration, much of it under George Gilbert Scott, and in 1908 a new West front was completed to replace Wyatt’s work.

The cathedral we see now is therefore essentially a Norman building with later additions. Its interior has some remarkable furnishings and fittings, including mediaeval glass, the fine 14th-century tomb of Sir Richard Pembridge (in full armour), the tomb of St Thomas of Hereford (Bishop Thomas de Cantilupe, 1218-1282), the small but beautiful 15th-century Audley Chantry, and the priceless mediaeval chained library, which contains books and manuscripts from the 13th century onwards. Chief among its glories is the Mappa Mundi, a map of the world showing Jerusalem at its centre, and dating from the 13th century.

The cathedral has the inevitable shop, and a modern café, situated in the cloister. The cathedral is famed for its music, a choir having been established here in the 13th century. Along with Gloucester and Worcester, it also hosts the famous Three Choirs Festival, every three years (the next occasion being 2009). Dating back to 1727, this is the oldest music festival in Europe, and possibly the world. Details can be found at: www.3choirs.org.