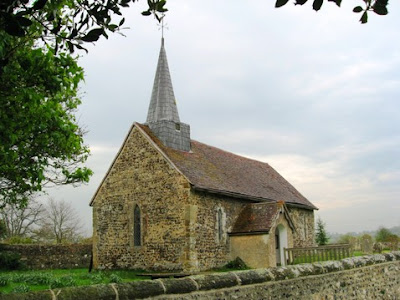 Set in the lush middle reaches of the Arun Valley, Greathan is one of those places where you can step back in time. The tiny village is strung out along a small lane, reached from the A29 over a perilously narrow bridge and lying so close to the water meadows it often floods in winter. On my visit, approaching from Storrington through Northpark Wood, a deer and two fawns ran across the road in front of me and across a woodland floor carpeted thickly with bluebells.

The church itself is found through a gate and up a long gravel drive, off Brooke Lane. The Drive leads to Greatham Manor, a fine 11th century manor house, rebuilt over the ages (the present house dates from the 16th century). Although the house is in private ownership, the adjacent church - reached along a grassy lane - is open to the public.

The church is an astonishing survivor. A single small cell built in the late 1000s or early 1100s, it must have been the place of worship for the local herdsmen, as well as the owners of the manor next door. A charter of 1121 lists the chapel among the possessions of Lewes Priory, and other evidence implies that it may have been given by the Dunstanvilles family, the putative owners of the manor at Greatham during the 12th century.

The church itself is a single cell, lit throughout by Early English Gothic single lancet windows, dated from the 1200s to the early 1500s. The eastern wall has evidence of a blocked-up earlier window, and now has just two simple lancets. The church has an unusual ‘double decker’ pulpit dating back to 1820 and 17th century communion rails.

On the wall is the single memorial, to the Chatfields, one of whom was a churchwarden in the early 19th century. According to the church guide, in the 1950s, the uncoffined burials of ‘five short men’ were discovered close to the north wall. These are thought to have been of five soldiers who died in a skirmish at nearby Greatham Bridge during the English Civil War in the 1640s.

The exterior is charming, built mainly in the local ironstone, with the odd Roman brick (the area was extensively settled in Roman times). The small spire was added between 1800 and 1865 to replace the original belfry, and the porch replaced the wooden original around the same period.

Even in mediaeval times, Greatham had to share its priests with nearby Wigginholt, but between 1364 and 1398 it seems large enough to have had its own priest, and in 1851 some 50-60 people are recorded as attending a service every other Sunday. To-day, the church still sustains regular services on the second and fourth Sundays of the month, under the care of the Vicar of Amberley.

In winter, it is lit by candles and oil lamps: there is no electricity. A rural idyll, indeed.